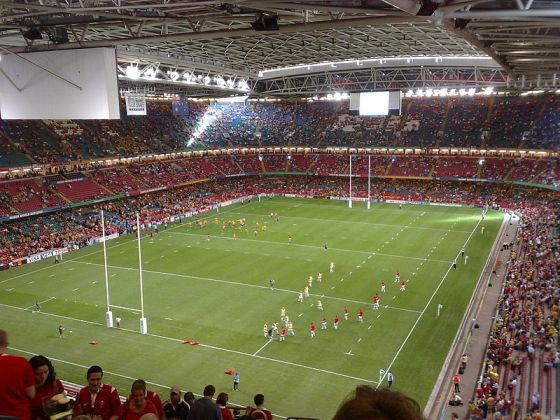 View from the North Stand (Upper) with the roof closed

Since 1999, Wales have had a world-class stadium in the Millenium Stadium that befits the importance and stature of rugby union in the country. The Welsh national team have been competing in fixtures since 1881, and rugby is undoubtedly the national sport here. In the Six Nations and its previous incarnations, the Welsh have won the title 25 times (with 11 Grand Slams) and shared the trophy on a further 11 occasions. Their most recent success came in in the 2013 tournament, when despite an opening day defeat to Ireland the boys in red lifted the trophy with a thumping of England on the final day.

Located right in the heart of the Welsh capital Cardiff on the banks of the River Taff, the Millenium Stadium is a superb multi-purpose sporting arena. In addition to rugby union maches, the Millenium also hosts soccer, concerts, rugby league and motorsports events. 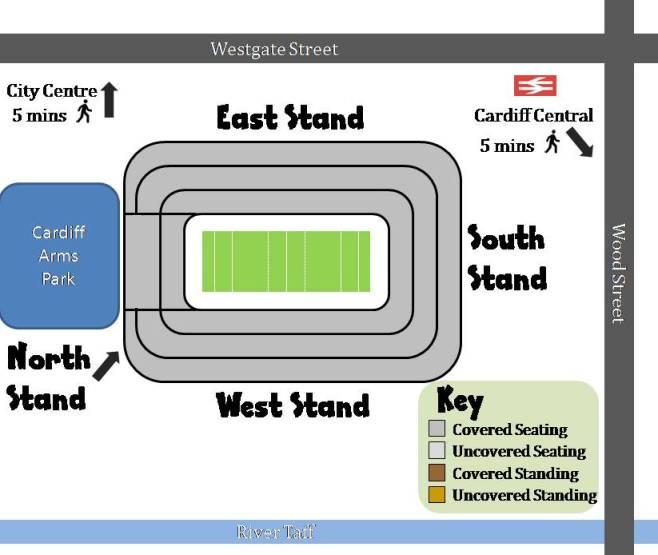 There are three tiers of seating on three sides, with a slightly unusual gap in the structure in the North Stand where there was limited space and therefore only two tiers. There are no standing terraces within the ground. The North and South stands are behind the posts, with the East and West stands running along the sidelines. Despite the size of the ground, the proximity of the stands to the pitch mean that even the cheaper seats in the top tier aren't too far from the action, and the giant screens suspended from the roof at either end of the ground help fill in any gaps.

As you would expect with a modern international stadium, the facilities are top-notch and supporters are sure to have a great day out, especially with the sights and sounds of Cardiff on the doorstep. Welsh supporters are passionate about their national team, and with a full house and the roof closed there are few better atmospheres in world rugby than at the Millenium Stadium.

As the stadium is right in the middle of Cardiff City, it is not difficult to find - simply follow the signs from the M4 motorway. However, there is no parking available at the stadium so you will need to find parking in the city centre or avail of the Park and Ride facilities on offer.

Cardiff's second station Queen Street only serves destinations within Wales, including those to the Vale of Glamorgan and the South Wales Valleys.

The X91 bus takes 35 minutes between the airport and City Centre, with services every two hours. Alternatively, a shuttle bus operates from the terminal to the airport train station, where an hourly service (two-hourly on Sundays) takes you to Cardiff Central station in about thirty minutes.

Edinburgh Airport is about 6 miles from Murrayfield and 8 miles from the City Centre. Although a relatively small airport, it does offer scheduled flights to most destinations in the UK and Ireland and a few further afield, including Belfast (City and International), Birmingham, Bristol, Cardiff, Cork, Dublin, East Midlands, Exeter, Jersey, Knock, London (City, Gatwick, Heathrow and Luton), Manchester, Milan (Malpensa), Norwich, Paris (CDG), Rome (Ciampino), Southampton and Shannon. Budget airlines Easyjet and Ryanair are the main players here. The Airlink 100 bus departs every 10 minutes or so during the day, and passes Murrayfield on its way into town - a quick and easy alternative for those who want to avoid the expense of taxis.

Glasgow Airport is an alternative option but a little trickier to negotiate once you arrive - first take a bus from the airport to Glasgow city centre then an onward bus or train to Edinburgh. A wide range of airlines operate into the airport, including Easyjet (to Belfast, Bristol, London and Paris amongst others), Flybe (to Belfast, Birmingham, Cardiff, Exeter, Manchester, East Midlands, Paris, Southampton), Aer Lingus (to Cork and Dublin) and British Airways (to London)

It's relatively easy to get a pint within the ground - there are 27 bars spread across all three tiers of the stadium and quick-pour machines ensure that services are swift. The bars are open before and during matches, with some remaining open for up to ninety minutes after the final whistle for post-match analysis.

You are spoiled for choice with options for drinks before and after a game in Cardiff, with the majority of bars, pubs and clubs within walking distance in a city famous for it's hospitality and nightlife. If you want to sample something local, try a pint of Brains, brewed in the local area.

Help Add Material to this Section

There are 15 food outlets within the Millenium Stadium for the hungry punter.

As a capital city and a popular tourist destination in its own right, Cardiff has a good range of accommodation on offer for visitors. You can stay pretty much anywhere in the City Centre and be within walking distance of the stadium, pubs, clubs, restaurants and attractions.

There are branches of the Best Western, Radisson, Marriott, Park Inn, Hilton, Ibis, Novotel, Thistle, Mercure, Premier Inn and Travelodge chains in town, amongst other independent hotels and guest houses.

You can submit information or images here.