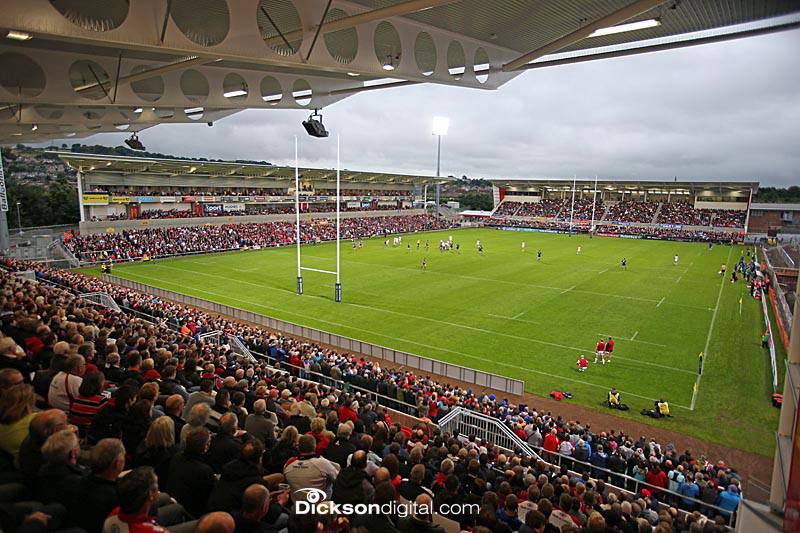 Ulster is the most Northerly of the four provinces that make up the top level of professional Irish rugby, encompassing the six counties of Northern Ireland and three in the Republic of Ireland (Donegal, Cavan and Monaghan). The side base themselves in the city of Belfast and play at Ravenhill Stadium in the southern suburbs, their home since 1923.

Ulster have a long and proud history, yet in the professional era have been striving to ditch the title of being the third Irish province behind Munster and Leinster, no easy task considering their monumental achievements in the professional era. Yet both on and off the pitch Ulster continue to build, and many expect them to pick up another trophy in the near future.

Ravenhill is a compact, enclosed ground and spectators are kept close to the action, which means a good atmosphere can be created, particularly on big European nights when the place is packed to the rafters.

On the East of the ground is a large stand that has a large standing terrace, corporate boxes and premier seating, alongside a full bar and restaurant. There are two stands at either end of the ground known as the Memorial Stand and the Family Stand. Both feature large covered seating areas with standing terraces to front, ensuring that the tradition of 'Standing up for the Ulstermen' can continue. The Memorial Stand also houses a new ticket office, shop and an impressive bar area underneath. The Aquinas Stand is the designated family area of the ground and home to the team changing rooms, training and media facilities.

On the West of the ground there is another large new stand, again with seating to the rear and standing to the front. 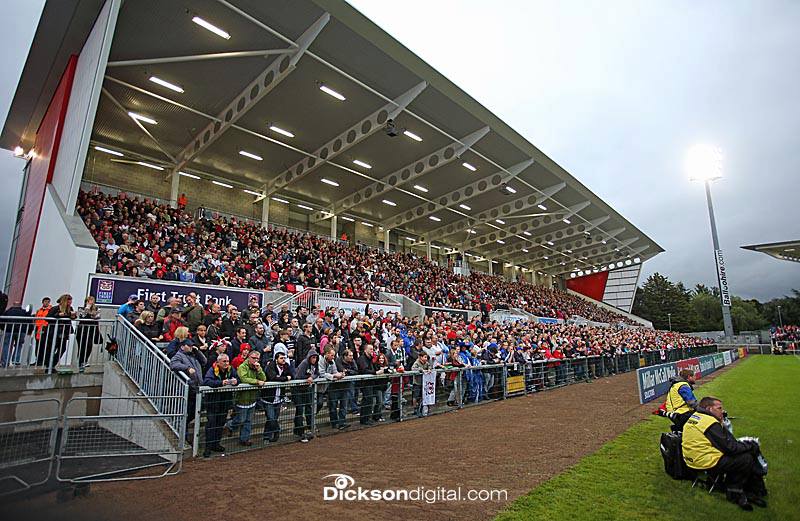 Ravenhill is not the most car-friendly of grounds due to the residential area that surrounds the ground, and associated strict parking restrictions. The club have managed to somewhat circumvent this issue by offering a superb free park-and-ride scheme from two locations not too far away (Pirrie Park and Montgomery Road/Alanbrooke Road/Ladas Drive area), though if you can help it your best bet is to use public transport if you can.

The traffic in Belfast can be a little heavy around rush hour, but it is possible (and possibly cost-effective in groups) to get a taxi to Ravenhill from most parts of the City. ValueCabs are the main operator in town.

After the game, there are taxis lined up and a queuing system in place to ferry people away from the ground.

Whilst there are no rail stations particularly close to the ground, traingoers can alight at Belfast Central station beside the city's redeveloped Waterfront area. It's almost two miles to the ground, the majority of the jaunt along the Ravenhill Road, flanked by Ormeau Park. Most of Northern Ireland's rail services pass through Central station, as do the cross-border services from Dublin.

A word of caution however - rail services in Northern Ireland are much more infrequent and finish earlier than in Mainland UK or Europe, so it is best to check the timetable in advance. All services are operated by Translink.

Translink provide shuttle bus services from the Europa Bus Station in Belfast's City Centre and a few other spots in town to Ravenhill on match nights, including return travel after the game. To get full details of times and prices, click here for a link to the official club site.

The most centrally-located of the two, Belfast City Airport (also known as 'The George Best City Airport') is located around a mile from the centre of town. In addition to London services operated by Aer Lingus and British Airways, Flybe offer services to a range of destinations in the UK including Aberdeen, Birmingham, Cardiff, Edinburgh, Exeter, Glasgow, Jersey, Leeds/Bradford, Manchester, Newcastle, Nottingham, Southampton and Paris (CDG). A taxi to the city won't set you back too much, but if you would rather save your pennies the Airport Express 600 bus operates every 20 minutes, and will drop you off at Belfast's Europa Bus Centre in next to no time.

13 miles to the North of Belfast, Belfast International is a bit further out of the way, but isn't too much of a trek and has a wider range of destinations. Budget airlines Easyjet and Jet2.com are the main players here, and between them cover most UK airports and a few in Europe. The airport is not served by rail, but there is a regular bus service to the City Centre that takes around 30 minutes.

The Port of Belfast is located right in the city centre, with daily passenger services to Cairnryan on the west coast of Scotland (2-3hrs) and Birkenhead near Liverpool (6-8hrs). Services are provided by Stena Line. 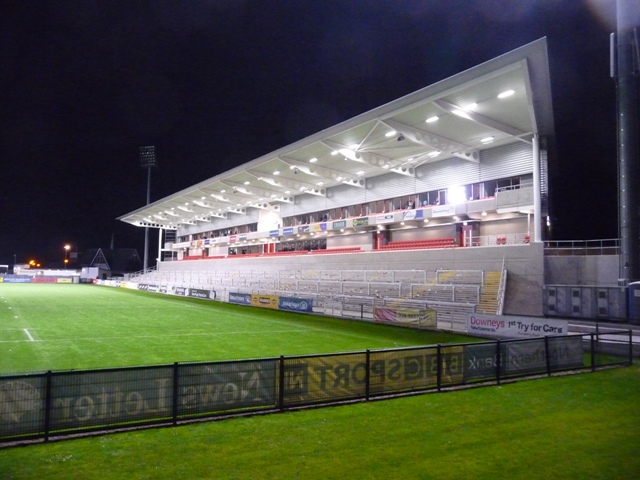 The East Terrace, with Premium Seating at the Rear

The Ravenhill faithful do like a drink, so you won't go thirsty here. There are several bars in the ground and the new Memorial Stand has an impressive new bar, though it can be quite busy. In and around the ground on matchdays there are usually mobile beer sellers if you aren't picky.

Belfast is a small but lively city that has plenty going on, whether you are after a few quiet ones or a big night out. Around the ground there aren't a huge number of places to go, though those on the Ormeau Road are within a decent walk. Rugby-friendly places here include the Errigle (the bar that sponsors the Ulster women's side) and the Pavilion. Both will show televised sports.

so for the visitor the best times are probably to be had in the city centre. Gotobelfast.com has a comprehensive list of bars, but here are a few suggestions. 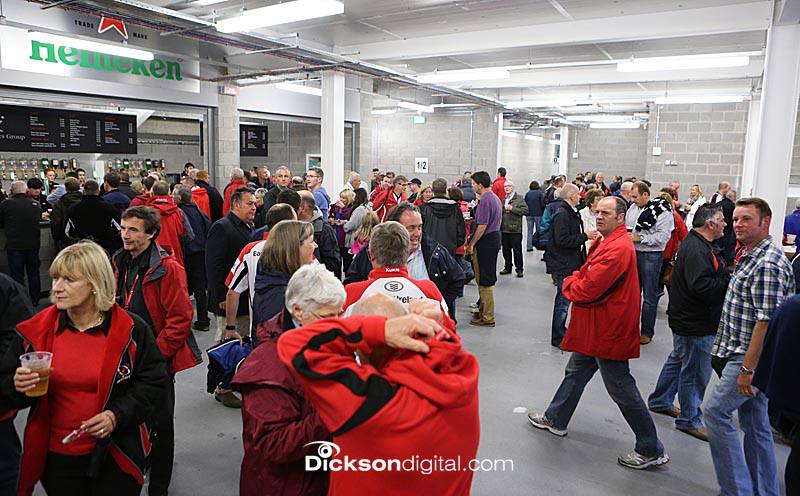 The bar in the Memorial Stand

The food village in the ground is located to the rear of the Memorial Stand, with a decent selection of grub to offer.

Most of the pubs listed also serve up food, but if you're looking for something different Belfast has plenty to offer. The chain restaurants that tend to hog the high streets on the mainland are starting to creep in, but there are still lots of worthy alternatives out there. GotoBelfast.com offers a good guide.

As the tourist trade grows in Belfast, the options for accommodation are also on the up. Here are a few recommended suggestions for your stay.

Although often overshadowed by Dublin as the place to visit in Ireland, there is plenty to see and do in Belfast, an up and coming city that isn't quite as tourist-heavy as it's Southern neighbour.