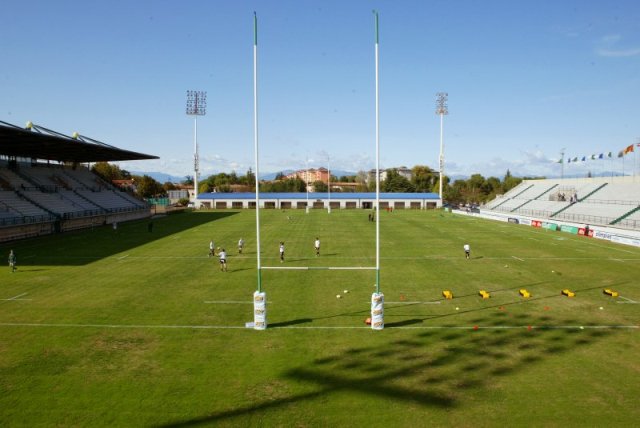 Benetton Treviso are one of the top sides in Italian rugby, and one of only two to compete in the Pro12 league. The Italian sides (the other being Zebre) joined this league in 2010 to assist with the development of Italian rugby and performances have been steadily improving since, particularly at home.

Since 1979 the club has been sponsored by the locally-headquartered Benetton clothing company, with the firm's name added to the club's shortly after. Treviso itself is the provincial capital of the Veneto region, and is a city passionate about rugby, as you can see from the green and white banners and flags all around the town.

The Stadio di Monigo is located around four kilometres from the centre of Treviso. The ground was built in 1973, and presently has two main structures. The main stand is covered, with plastic seats in the middle of the stand and at the two ends it is simply rows of concrete - in winter the regulars bring a cushion or simply sit on a newspaper on cold nights! You can also buy a pad in the club shop as a useful souvenir to keep your behind warm. 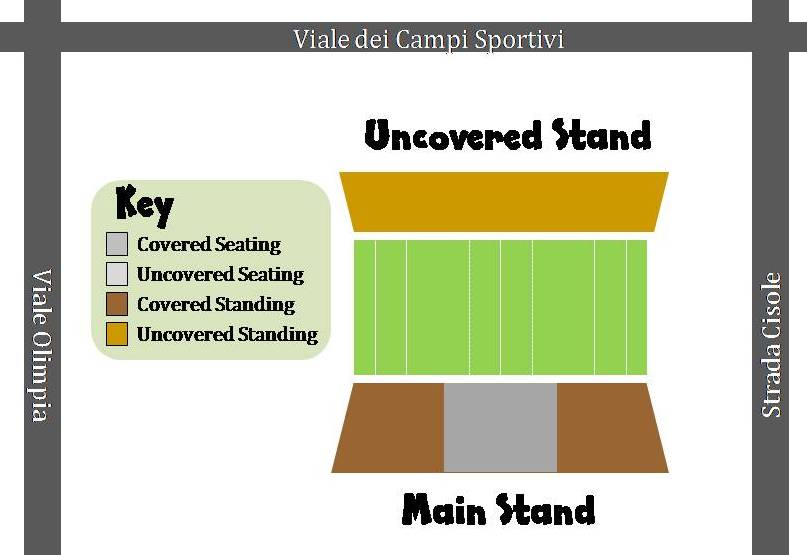 Underneath this principal stand there are toilets, a bar and the club shop. Opposite the main stand is another uncovered concrete stand. Not ideal for the rainy winter nights in Northern Italy, but the locals are a hardy bunch and simply come prepared.

Although relatively small compared to other clubs in Europe, there is a great passion for the game and their team in Treviso, and the matchday atmosphere is brilliant. The call of 'Leoni' (Lions) will ring out around the ground, and everyone gathers before and after the game in the club bar underneath the Main Stand.

There is parking for around 1,000 cars at the stadium.

Treviso Centrale station serves the city, which is located just to the south of the town centre. Treviso is a major station in the Veneto region and regular services operate to Venice, Trieste, Udine, Vicenza and Milan. Tickets can be purchased inside the station building. It's a bit of a trek to the ground (approximately 5km) so you are best to jump on the bus services from the nearby cathedral.

Bus route 9 from the city centre stops near to the stadium and is the best way to get to the ground unless you fancy a long and rather uninteresting walk. The bus departs from the cathedral close to the train station, and it's not hard to know where to get off as you can see the stadium easily. The buses don't run that late in the evening though, so depending on kick-off time you might need to catch a taxi back into town after an evening game.

Treviso is served by two airports;

Venice Treviso airport is just a few kilometres outside the city and is primarily used by Ryanair as their low-cost base for visitors flocking to nearby Venice. If you're heading to the rugby though, it's perfect! At the time of writing flights were operating to Bristol, Dublin, Leeds/Bradford, East Midlands and London Stansted. It's a small airport, and very easy to get into the city centre from - a bus operates from right outside the front door and will have you in the town centre in around 10-15 minutes, but it is cheaper to purchase your tickets inside the terminal rather than from the driver.

The principal airport in the region, Venice Marco Polo airport is approximately 30 kilometres from Treviso, and operates flights to a multitude of European destinations, including Dublin (Aer Lingus), London (British Airways / Easyjet), Paris (Easyjet / XL Airways) Manchester (Jet2.com / Easyet), Leeds/Bradford, Newcastle (both Jet2.com) and Birmingham (Monarch). Once off the plane, you can take a bus to the nearby rail station at Venice-Mestre for services to Treviso.

Alternative airports that are accessible from Treviso include Trieste, Verona and Milan. 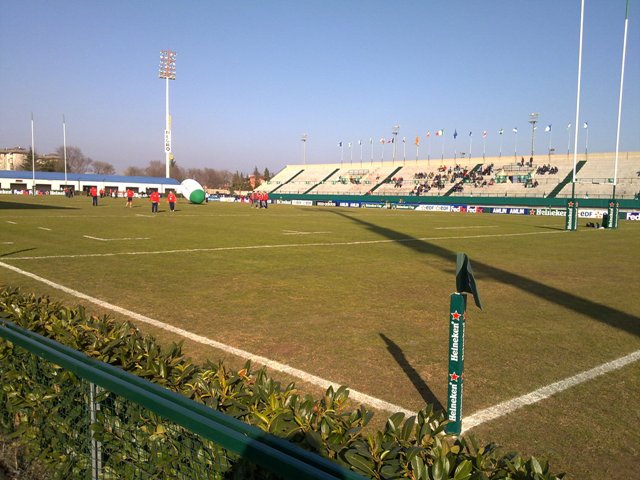 The best place to get a drink in the ground is the bar below the main stand, where supporters congregate before the match and at half-time. There is also a local rugby club next door who often invite visiting fans into their clubhouse.

Treviso is a city that pre-dates the Roman era, and is full of cobbled streets, little alleys and bridges to explore. There are lots of bars and cafes in and around the city centre, mostly on the smaller side. Visiting fans are sure to be given a warm welcome by the locals though who love their rugby.

On Via Roma (beside the Continental Hotel on the South side of the river) there is a Celtic Bar that is usually popular with travelling fans, and stays open into the small hours! Alternatively, try Home Rock Bar in the northern suburbs of Treviso. According to local supporter Barbara, this joint is popular with local rugby fans, stays open late whilst Nasty Boys (aptly named for rugby tours?) serves up Tex Mex food and live music. 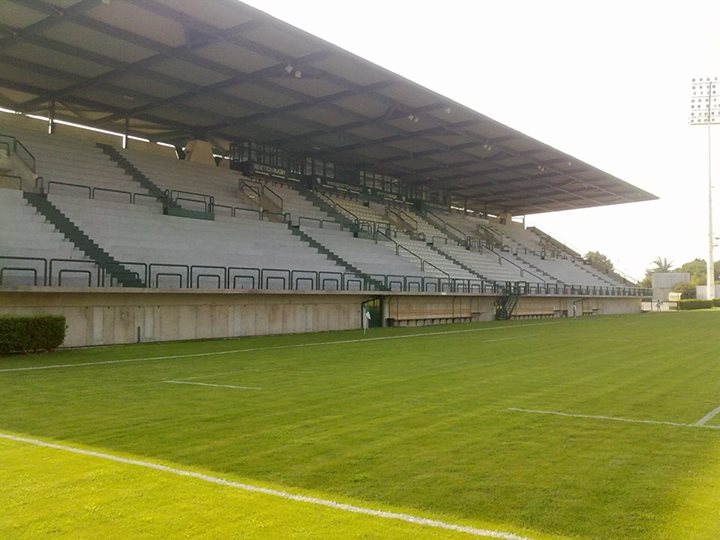 Contributor Gary recommends a little bar-restaurant 100 yards from the stadium called Osteria con Cucina. It's frequented by Treviso supporters, has excellent reasonably-priced food and a welcoming host in Massimo.

Back in town, Pizzeria da Fausta is slightly hidden but well worth the effort, whilst contributor Glenn recommends the Da Pino pizzeria on Piazza dei Signori, the main square right in the centre of Treviso. As you might expect in the Bel Paese, there are plenty of other great places to eat in Treviso - probably more than you could get around in one trip.

If you are just back from a game and can recommend anywhere else in particular, let us know here and help out your fellow rugby travellers!

Due to the nature of the city, large chain hotels are not commonplace in Treviso. Here are a few suggested locations that have been used by previous visitors.

Treviso is a truly great place to spend a weekend. To understand why it is known as 'Little Venice', explore the historic centre and canals. You can complete a circuit of the winding alleys and canals in a few hours before relaxing with some great food or drinks or having a look around the shops on Via Calmaggiore. Prodigioso!

Depending on your travel route you may already be passing through nearby Venice, though be warned if you are averse to mass tourism it may not be for you! Plenty of rugby tourists tell us that they originally plan a day-trip to Venice as part of their weekend away, but change their mind and just enjoy all that Treviso has to offer.

The surrounding area is wine country (Prosecco in particular), so there are plenty of vineyard and wine tours on offer.