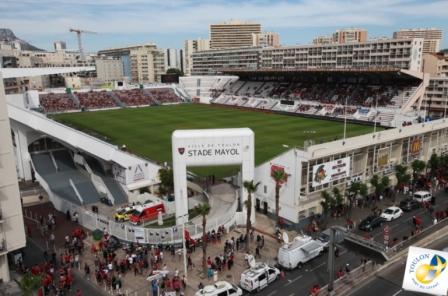 Rugby Club Toulonnais compete in both the Top 14 and Heineken Cup, and are based in the city of Toulon on the Mediterranean Coast of France. The club were founded in 1908, and reached the top flight of French rugby in 1923. A French league title shortly followed in 1931 after a 6-3 victory over Lyon Olympique Universitaire. Despite remaining one of the top clubs in the country over the subsequent years, Toulon's next title didn't arrive until 1987. Times have changed however and an influx of money and global stars of the game have led to Toulon becoming one of the most feared sides in European rugby.

The Stade Mayol is situated rather idyically, right in the heart of Toulon beside the busy Mediterranean harbour. It is named after the popular local singer Felix Mayol who purchased and gifted the land on which it is built. With a capacity of 14,700 it is one of the largest rugby union stadiums in France, but the popularity of the team has led to some high-profile matches being switched to the soccer stadium in nearby Marseille or Nice. Given the growing status and popularity of the side, development is likely but nothing has been confirmed as yet. 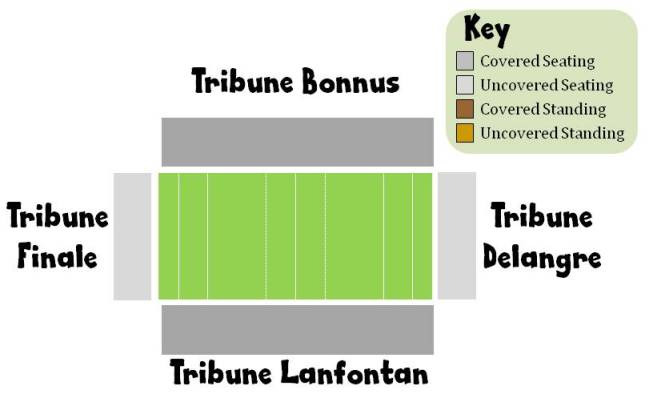 The stadium is fully enclosed on four sides. The 'Tribune Bonnus' runs the length of the pitch on one side and is a large all-seater structure. On the other side of the pitch lies the Tribune Lanfontan, another large covered stand with seats decked out in the club colours of red and black. Behind the posts you'll find the Tribune Delangre and Tribune Finale, also all-seater but without cover from the elements. The first couple of rows of these stands are behind a fence that slightly obscurs your view. There are two large screens in the corners of the ground. The ground tends to be close to capacity for most matches, and a great atmosphere tends to follow.

You can get to Toulon via the A50 motorway (from Marseille in around 45 minutes) or the A8/57 motorways (from Nice in around 90 minutes). The A50 in fact takes you almost to the door of the ground. There are over 2000 parking spaces either in the 'Mayol' Parking underneath the ground or next to the stadium in the 'Facultés Mayol 2' parking.

Toulon is on the high-speed rail network, meaning you can get to other parts of France quickly and easily. The trip to Lyon takes around 2 hours and 30 minutes, with Paris around 4 hours away. Other direct services include those to Marseille, Montpellier, Nice and Bayonne. The station is ideally situated just to the north of the City Centre, only 10-15 minutes walk from the Stade Mayol.

You can book tickets for TGV services via Rail Europe.

The local bus network in this part of the world is known as the Mistral, which has numerous lines serving the stadium - 3, 7, 23, 40 and 191. Information in both French and English can be found here. Unless you stay outside of the central parts of town, it's unlikely that you will need to use buses to get around.

If you are fortunate enough to have a direct flight to Toulon airport, you'll find yourself only 20km or so East of the City. At the time of writing, flights were operating to London Stansted (Ryanair) and Paris Orly (Air France). From the airport you can take a shuttle bus to Toulon in around 30 minutes, with buses timed to coincide with flight schedules.

Marseille Airport is about 90km from Toulon by road, and has a far wider range of destinations on offer than Toulon. Flights currently operate to Bordeaux, Biarritz, Lille, London (Heathrow, Gatwick and Stansted), Lyon, Milan (Malpensa), Nantes, Paris (Beauvais, CDG and Orly), Rennes, Rome (Ciampino and Fiumicino), Toulouse and Venice (Marco Polo) year-round, with additional services in the summer months,

To get to Toulon from the airport by public transport, you can take the Lignes Express bus to Aix-en-Provence TGV station and then catch the high-speed train for an hour-long journey to the centre of Toulon.

Around 140km from Toulon, Nice Airport is another place offering plenty of flights to the Mediterranean coast. Scheduled year-round flights operate to all over France in addition to Bristol, Dublin, Liverpool, London (Luton, Gatwick, Heathrow and Stansted), Rome (Fiumicino) and Venice (Marco Polo).

From Nice Airport, take the bus to Nice train station then head to Toulon from there - there are regular direct trains taking just under two hours. In addition, there is a smaller rail station about a 10 minute walk from the airport, but connections aren't particularly quick. Rail Europe can deal with the tickets. 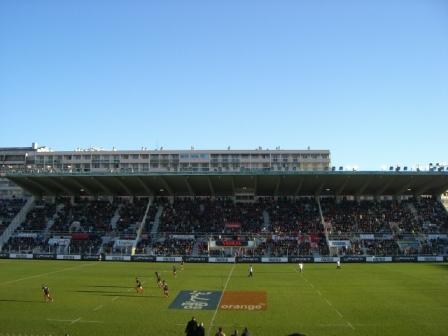 As a navy town, Toulon has no shortage of bars to quench your thirst. The area around the waterfront promenade is the first place most visitors head to, but there are plenty of choices across the City.

Can you provide information for this section? Let us know here.

The stadium is next door to a marina, which not only has many luxury yachts moored there but a wide choice of restaurants - you'll be spoiled for choice! There is also a shopping mall nearby with bars and fast food restaurants, including the RCT Cafe.

Any more recommendations for somewhere to eat in Toulon? Let us know!

There's more than a great climate to tempt visitors to Toulon. Nestled between a mountain range and a large bay, there is plenty to see and do in this small industrial port city.

There is an old town dating back to the Middle Ages, a harbour area with shops and restaurants and a large square (Place de la Liberté). There are several beaches to choose from, daily markets and a cable car that will take you to the top of Mount Faron that overlooks Toulon.

The Mediterranean coast of France is a great place to explore and pretty much perfect for a road trip - coastal villages, tourist resorts and cities are all within easy reach.