The French are never ones to shy away from a hefty club name, and Stade Français Club Athlétique des Sports Généraux is no different. Founded way back in 1883 in their original form, the Parisians are one of the names in club rugby and are never shy to try something different. In the early days of competitive rugby in France, Stade were one of the top sides and won the French Championship on eight occasions between 1893 and 1908.

Then followed a barren period that lasted nearly a century with the side knocking about the lower divisions of French rugby. Queue owner Max Guazzini, who merged Stade with the CASG club in 1992 and built the club back into the top-flight, all-singing all-dancing side that it is today.

Although big fixtures can find themselves moved to the much larger Stade de France, the Stade Jean-Bouin is Stade Français' regular home. You can never be sure of quite what you'll get on matchday here with some unusual and less traditional punts at matchday entertainment ranging from cheerleaders to radio controlled cars, that does little to stifle the discontent often aimed at the club from the game's purists. 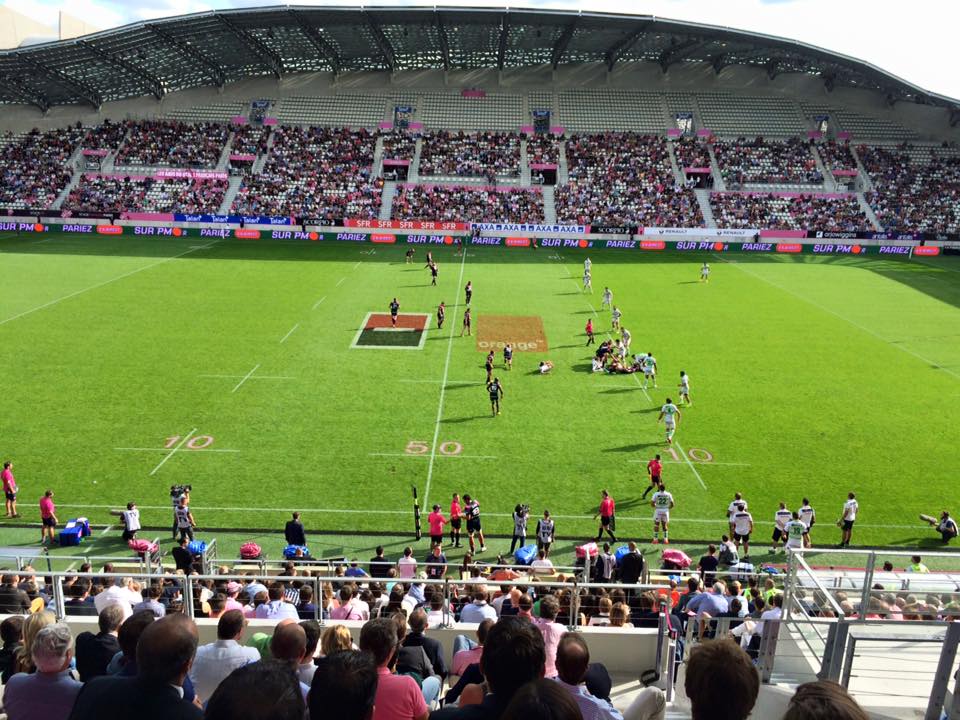 The Stade Jean-Bouin is a fully covered, fully seated ground right next door to the Parc des Princes in the 16th district of the French capital. Redeveloped in 2013 to its current capacity of 20,000, it is a modern and attractive stadium. Constructed in a bowl shape, there are significantly more seats along pitchside compared to behind the posts (to reduce the impact on local residents) and a good sprinkling of pink is always in view.

It's an eco-friendly ground, with rainwater collected to water the pitch and solar panels to provide green energy.

If you are brave enough, there are parking spots available at the ground but they are in short supply.

The Parisian metro system is excellent, and even for the non-French speaker is straightforward to navigate. There are several stops within an easy walk of the stadium, either on Metro Line 9 (alight at the 'Exelmans' stop) or Line 10 (Porte d'Auteuil).

Paris is a focal point of the high-speed rail network in France and Western Europe. The majority of international services arrive at the Gare du Nord, including those from London, Brussels, Holland and Germany.From within France, the majority of high-speed services operate to the Gare Montparnasse, whilst slower services arrive at either the Gare d'Auterlitz (from central/SW France) or the Gare de Lyon (from South/Eastern France). Use the Metro / RER services listed above to get to the stadium, which will likely involve a change or two.

Paris is served by three airports; Charles de GaulleSituated in the northern suburbs, Charles de Gaulle is the closest airport to the Stade de France and also the largest airport in Paris. Flights operate to a wide range of rugby-friendly destinations including Belfast (City and International), Birmingham, Cardiff, Cork, Dublin, Edinburgh, London (Heathrow, Luton and Stansted), Manchester and Toulouse. Major airlines based here include Air France, Easyjet, Aer Lingus and Flybe. A word of warning however - the airport is subdivided into loads of terminals, so make sure you know in advance which part you need!The airport is served by direct trains (RER B) to the Stade de France and the city centre. If you are willing to risk the traffic on the roads, there is also a direct bus service operated by Roissybus from the airport to Paris.OrlyOrly Airport is situated in the southern suburbs, where the RER train line B provides connections to central Paris and onwards to the Stade de France. Scheduled flights operate to destinations across France in addition to London (City and Heathrow), Milan (Linate), Naples, Pisa, Rome (Fiumicino), Southampton and Venice (Marco Polo).BeauvaisBeauvais is the Parisian choice for low cost carrier Ryanair, and as expected it is also the furthest away from the city (around 80km!). Destinations include Dublin, Edinburgh, Glasgow (Prestwick), Venice (Treviso), Rome (Ciampino) and Marseille.To get into Paris, take the shuttle bus to Porte Maillot station (journey time around 1h 15 minutes) where the Paris Metro or RER will take you the rest of the way into town. Alternatively you can take a taxi around 15 minutes to the train station in Beauvais town centre, where services operate to the Gare du Nord, taking around an hour.

There are numerous bars inside the stadium, all with the now obligatory recyclable cup in France. After the match, the concourse comes alive as people congregate for a drink, often accompanied by a live band.


Paris is a city full of fine eateries to suit every taste and budget, far too many to include on a guide like this.

Do you know any particular spots near the ground, or with a Stade flair? Let us know here!


Can you add more information for this section on specific options close to the Stade Jean-Bouin? Let us know here!

There isn't enough room here to detail all the sights and attractions that make Paris one of the most visited cities in the world. Try Wikitravel for details and recommendations on what to see and do during your stay.