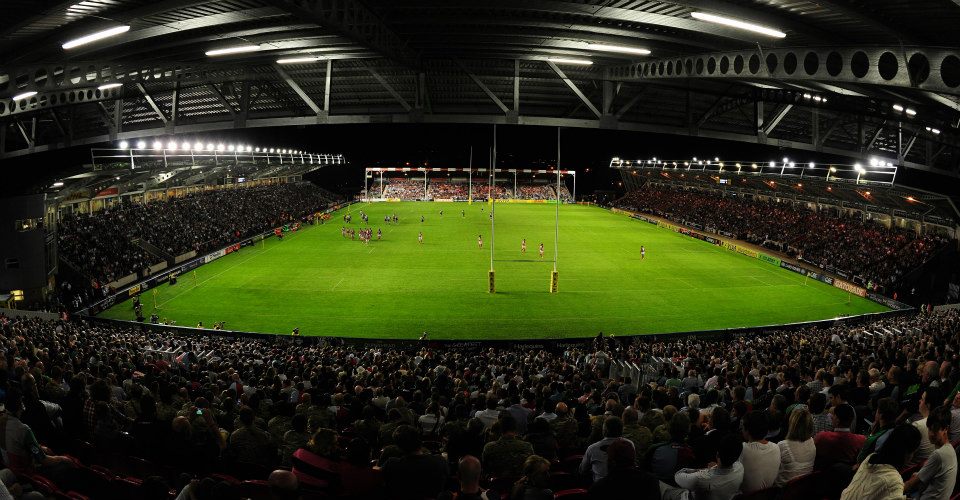 Harlequins (or to use their proper name The Harlequin Football Club), were founded in 1866 (150 years and counting!) and compete in the English Premiership, European Cup and LV Cup. They are based at Twickenham Stoop, a stone's throw from the English national stadium Twickenham.

Since the advent of leagues and professional rugby, Harlequins have spent every season but one in the top tier of English rugby, and collected many trophies in the process. In addition to currently holding the Premiership title following a 30-23 final win over Leicester Tigers, the club have won the European Challenge Cup and predecessors three times (2001, 2004, 2011) and the national cup competition twice (1988, 1991). In the European Cup, the closest Quins have come to success was in the 2008-09 season when they reached the quarter-finals.

The Twickenham Stoop is fully enclosed on all sides, and the ground is usually close to capacity, ensuring a good atmosphere.

The East, or Eithad Stand was built in 1997 and provides 4,200 covered seats, in addition to corporate hospitality boxes. The stand runs beyond the length of the pitch so if you are seated in one of the end blocks you may find yourself beyond the try line! Sitting opposite the Etihad Stand is the LV= Stand, an equally lengthy structure opened in 2005. This all-seater stand has a capacity of 4,000, and is also home to the member's bar, club shop, more corporate boxes and the club offices. 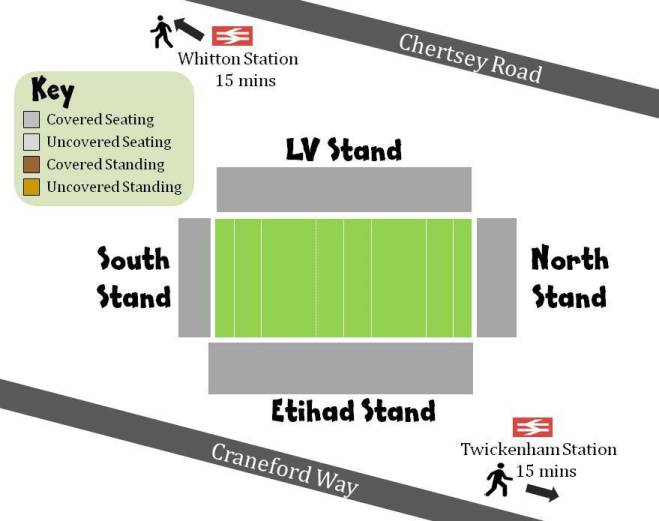 The South Stand behind the posts is the most recent addition at the Stoop, with 4,000 seats. Down the other end, the North Stand is a semi-temporary structure with room for around 2,000 seated spectators. It is the only stand with supporting pillars that do obstruct the view slightly.

Vehicle access to Twickenham Stoop is via Langhorn Drive, and the ground is within easy reach of the M3 and M4. Car parking is available at the ground, with driving directions here.

The closest station to the ground is Twickenham, around 10-15 minutes walk from the stadium. Twickenham is served by regular services from London Waterloo to Reading, with the majority of trains calling at Clapham Junction for those connecting from other parts of the South of England. Upon exiting the station, turn right and then left at the roundabout. Signs will direct you left onto Court Way then left again onto Craneford Way - follow this road round until you reach the ground.

An alternative is Whitton station, which is also within a short walk of the stadium. Upon leaving the station, head North on Percy Road before taking a quick right onto Bridge Way. Follow this road until you reach Redway Drive, where you take a right then left onto the busy Chertsey Road, and continue until you reach the Stoop.

Twickenham is around 6 miles from Heathrow Airport, which you'll notice as the flight path passes nearby! From Heathrow, take the Piccadilly Line of the London Underground to Hounslow East station, and transfer to the 281 bus for the remainder of the journey.

Twickenham is also easily accessed from London Gatwick airport - simply take a train towards London (not the Gatwick Express) and change at Clapham Junction for services to Twickenham. 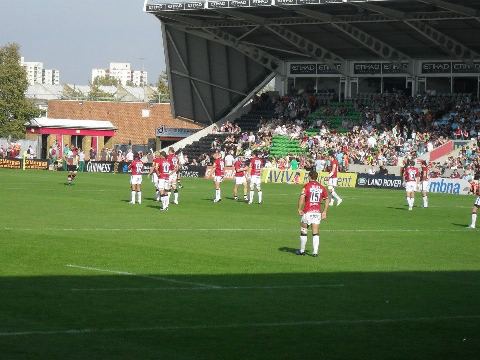 The highly-recommended Turk's Head pub on Winchester Road is en route between the station and the stadium, with live sports, food and a lovely pub garden to boot. 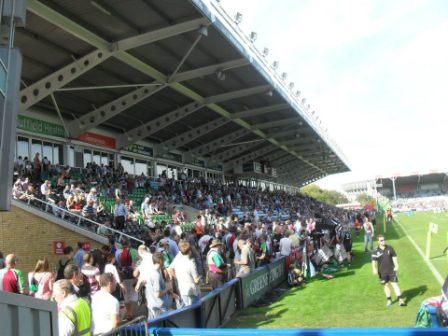 There is a wide range of interesting grub on offer at the Stoop, with an international cuisine stall in between the South and LV= Stand, in addition to sausages and hog baps on sale from various vendors dotted around the ground.

Away from the stadium, there is no desperate need to head back to Central London as you'll find plenty of options in the bars and restaurants of Richmond and Twickenham,  whilst the majority of bars listed above also serve food.

Whilst many visitors opt to stay in Central London and combine rugby with a spot of sightseeing, those who want to stay close to the stadium and avoid the hassle of the journey out can take advantage of the following;

Whilst in the area, check out the World Rugby Museum in Twickenham Stadium that is home to a wide range of rugby memorabilia and charts the history of the sport.

Alternatively, Hampton Court Palace, the fantastic Richmond Park and the Royal Botanical Gardens in Kew are all in close proximity, whilst all of London's attractions are a short train ride away.