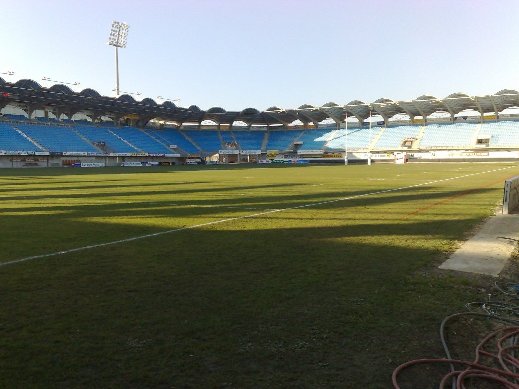 The rugby union side in Perpignan (Union Sportive des Arlequins Perpignanais in French or Unió Esportiva dels Arlequins de Perpinyà in Catalan) was founded in 1902, and have been competing at the sharp end of French rugby ever since. The club are proud of their Catalan identity, and have adopted the red and gold colours of Catalonia as their own.

The club were relegated from the Top 14 at the end of a disappointing 2013-14 season, and currently play in the Pro D2.

The Stade Aimé Giral is the home of USA Perpignan, and has been since it opened in 1940. The ground is situated 2km to the North of the City Centre, and is named after a former club captain who died in the First World War, which claimed the lives of seven Perpignan players. There is a fine memorial located at the stadium entrance to them all. 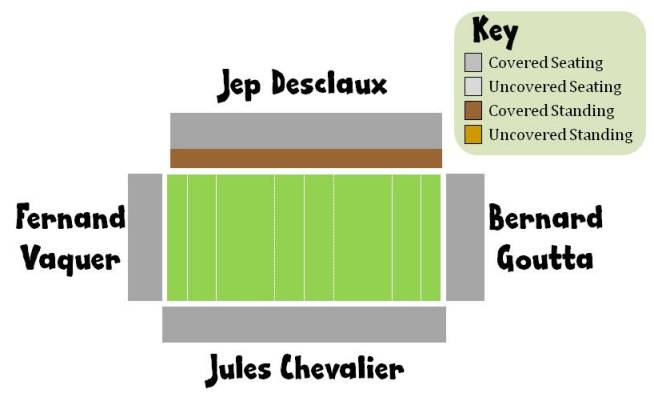 The stadium is fully enclosed, with the Jep Desclaux and Jules Chevalier stands running the length of the pitch, and the Fernand Vaquer and Bernard Goutta stands behind the posts. The Desclaux is the only stand to offer a pesage or standing area to the front, with a larger tier of seating behind. The ground is compact and is usually close to capacity, so you are almost certainly guaranteed a good atmosphere for your visit.

If you are driving to Perpignan, from the main A9 road from the North or South, then exit following signs to the Centre and then on to Aimé Giral. Unless you have a disabled badge on display, you are unlikely to find anywhere to park in the vincinity of the stadium, so take advantage of the free park and ride shuttle buses on offer (see below)

Perpignan is served by high-speed trains from both Paris (5 hours) and Barcelona (3-4 hours), with direct services also operating to Toulouse, Narbonne, Montpellier and Marseille. From Perpignan station (declared to be the centre of the universe by artist Salvador Dali!), take bus number 2 (as above) to the ground.

Bus number 2 (in the direction of Avenue Languedoc) will take you from the City Centre to the ground. There are also shuttle bus services from the centre to the ground and back after the game, completely free for those holding a match ticket - bravo USAP for a fine initiative!

Located approximately 7km to the North of Perpignan, the small Rivesaltes Airport is ideal for travelling to Perpignan if you are lucky enough to get a direct connection. At the time of writing, direct flights were operating to Dublin, Birmingham, Southampton and London (seasonal only), with year-round flights to Paris (Orly).

Just over the Spanish border, the much larger Girona Airport is around an hour's drive from Perpignan. Ryanair operate year-round services to Manchester and Paris (Beauvais), with a much wider range of services operating during the warmer months. Frogbus operates a direct bus link between the airport and Perpignan, with the transfer taking just under 2 hours.

Around 120km from Perpignan, Beziers is a small airport with scheduled flights to Bristol, Edinburgh, London (Luton), Manchester, Paris (Beauvais) and Southampton. There is a shuttle bus that runs from the airport to Beziers train station, where you can then catch a train to Perpignan, that takes around one hour.

Around 130km from Perpignan, Carcassonne is another Ryanair-dominated airport in the South of France. Scheduled services operate year-round to Dublin, Liverpool, London (Stansted) and Paris (Beauvais). A shuttle bus operates to Carcassone rail station from where you can catch train services to Perpignan (most likely involving a change at Narbonne, but sure it's all part of the adventure). 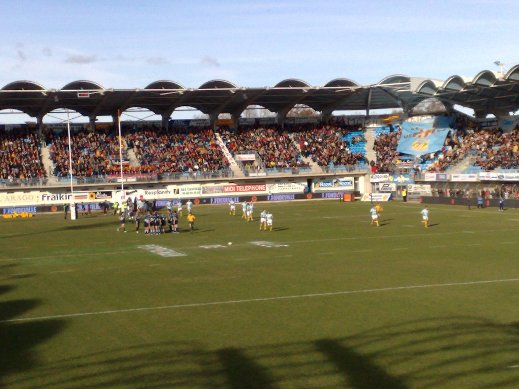 The Fernand Vaquer stand behind the posts

The bars and restaurants close to the ground are few and far between, so your best bet would be to head for the centre of town about 20 minutes away by foot, or jump on a bus.

In town, there are a good selection of bars serving all pockets and tastes and this is also where all the better eating establishments are situated.

If you're sticking near the ground, Le Punjab on the North side of the Pont Joffre offers Indian food with nice views over the river.
Where's the best place to grab a drink in Perpignan? What's on offer in the ground? Let us know and help out your fellow fans here.

Any recommendations for where to stay in Perpignan? Let us know!

Perpignan is a small city located just inland from the Mediterranean sea, so for most travelling fans the warmer climate will more than likely be welcomed! The average maximum temperature is 12C in January, 18C in April and 20C in October. The city's sports scene is dominated by rugby, as the top rugby league side in France the Catalan Dragons also play here (at the Stade Gilbert Brutus a little further to the North).

Away from sport, the city is an interesting mix of cultures due to high levels of immigration over the years. There are plenty of squares, cafes, bars and shops to divert your attention for a weekend or so.

Perpignan is well located for the Pyrenees and the Mediterranean coast, and is also well connected to Barcelona by rail (journey time around 3-4 hours).