The name Oyonnax wasn't one that was particularly well known in rugby circles until the early part of this century, although they were initially founded in 1909. The side first came to the attention of the majority of the rugby world in 2003 when they won promotion to the second tier of French rugby. After a ten year spell at this level, Oyonnax won the Pro D2 and reached the top flight for the first time.

One of the smaller grounds in French rugby, the Stade Charles-Mathon takes its name from one of the club's leading players prior to the Second World War. The stadium is located just outside the centre of the small town, about a 20-minute walk. 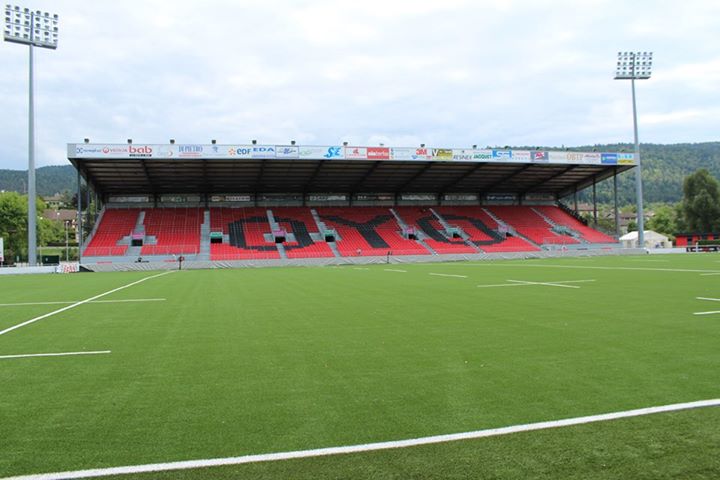 The stadium has been modernised bit by bit and is now completely renovated, with two main stands alongside the touchline, the Mathon with 1,720 seats and Ponceurs with just shy of 4,000. Behind the posts we have the North and South stands, with 1,000 and 2,000 seats each. All stands are covered, which is handy as the weather can get pretty chilly in this part of the world.

For those with a motor, Oyonnax is connected by the A404 to the A40 where connections to Lyon, Paris and Geneva can be made.

Oyonnax has a railway station, but isn't particularly well connected to the high-speed network. Services operate from Oyonnax to Bourg-en-Brasse (currently a bus replacement) where you can catch a TGV to the likes of Paris, Strasbourg, Geneva and Lyon.

Oyonnax fits nicely into the challenging category for most travelling fans, but that's part of the fun right?
GenevaThe closest airport to Oyonnax is across the border in Geneva, around 70km away. Scheduled services operate year-round to Bristol, Dublin, Edinburgh, Liverpool, London (City, Gatwick, Heathrow and Luton), Manchester, Newcastle, Nice, Paris (CDG and Orly), Rome (Fiumicino) and Toulouse amongst others.

Seasonal flights also operate in the winter for those heading for the slopes of the Alps, with destinations including Aberdeen, Belfast (International), Birmingham, Bournemouth, Cork, Edinburgh,Glasgow, La Rochelle, Leeds/Bradford, London (Southend and Stansted) and Nottingham/East Midlands.

The drive should take around an hour from Geneva, or you can opt for a train adventure - jump on the direct train from the airport to Geneva's main station. From there, it's an hour or so on a high-speed service to Bourg-en-Bresse. A change here and another short ride on a local rail service (currently a bus replacement!) and you're in Oyonnax! The journey should take around 3-hours, but there aren't many each day so you may have to hang out in Geneva for a while for a direct connection.

LyonLyon Airport is just under 100km from Oyonnax.  There are scheduled flights all year round to destinations including Birmingham, Bordeaux, Dublin, Edinburgh, London (Gatwick, Luton and Heathrow), Nantes, Paris (CDG), Rome (Fiumicino), Toulouse and Venice. Seasonal flights for the skiers also operate to Belfast, Biarritz, Bristol, London (Southend) and Manchester

There is a tramline operating from the airport to Lyon's main station (Part Dieu). From there, take the train to Bourg-en-Bresse and from there you can hop on a connecting local service (currently under bus replacement) to Oyonnax.

The Mathon stand is home to a clubhouse where televised matches are often shown. The clubhouse opens 90 minutes before kick-off for those pre-game beverages.

Can you help us out with this section? Let us know here!


Can you help us out with this section? Let us know here!

As a small town that doesn't attract a huge influx of tourists, there isn't a huge range of accommodation to Oyonnax. Some may opt to stay further afield in Bourg-en-Bresse, Lyon or Geneva, but there are still options to be had to stay in the thick of it.


Can you help us out with this section? Let us know here!

Have you been to Oyonnax or the surrounding region and can recommend any sights, sounds or attractions of note for the discerning rugby traveller? Let us know here! .

Reach for the Alps...and Europe

Time for the Top Table