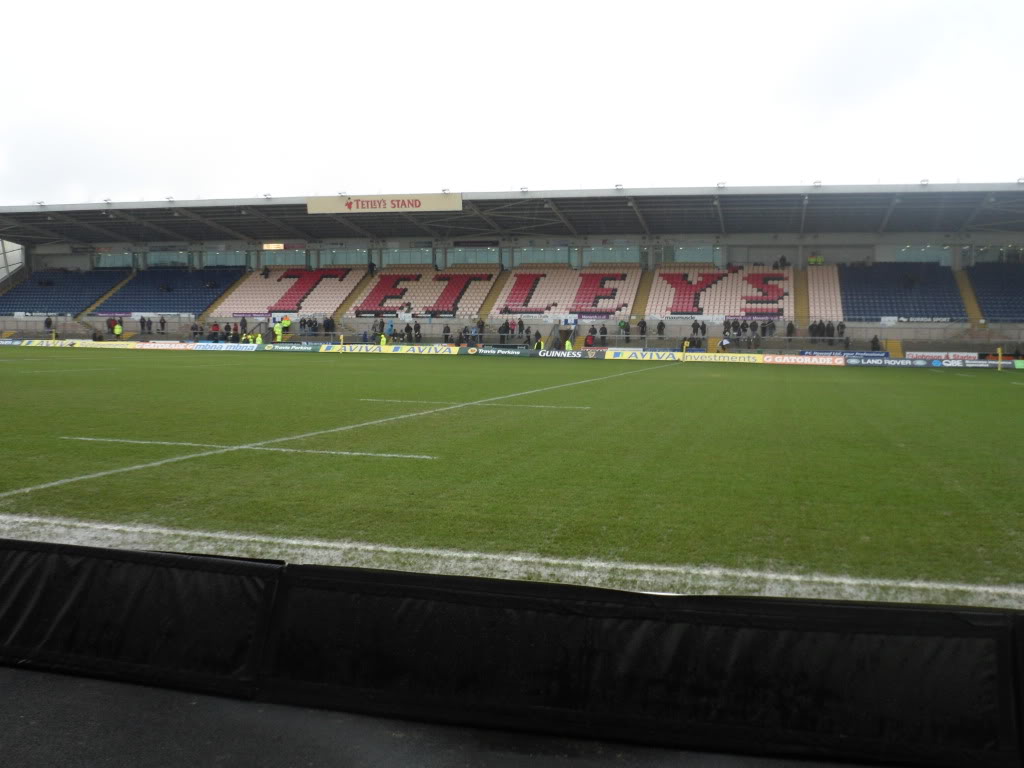 Northampton Saints were formed in 1880 and have traditionally been one of the major forces in English club rugby. In the professional era the club have been a regular in the Premiership, aside from one year spent in the Championship in the 2007-08 season. After challenging on numerous occasions, the club lifted the English Premiership trophy for the first time in 2014 following a narrow win over Saracens in the final at Twickenham. That victory was avenged the following year when the Saints were downed by Sarries after topping the table in the regular season.

The club's European pedigree is good too - the Saints won the European Cup in 2000 and have also triumphed in the English domestic cup competition (twice) and the second-tier European Challenge Cup (twice, most recently in 2014). The club have a fierce rivalry with their neighbours Leicester Tigers.

The club's home since the late 1880s is Franklin's Gardens, a great purpose-built rugby stadium just outside the town centre.

Franklin's Gardens is a fully enclosed ground located just to the West of the town centre and railway station. The surrounding area is quite industrial-looking, but the main bars, hotels and restaurants in the centre of town are within easy reach. The rear of the Tetley's Stand is visible as you as you enter the ground, and runs the length of the pitch. The Gordon Terrace runs along the front of this stand and provides a covered standing area, whilst at the rear there are corporate facilities.  Behind the goal to the left of the Tetley's Stand is the Burrda Stand, developed in 2005 and providing covered seating and more boxes. The Church's stand sits opposite the Tetley's and is also an all-seater stand. 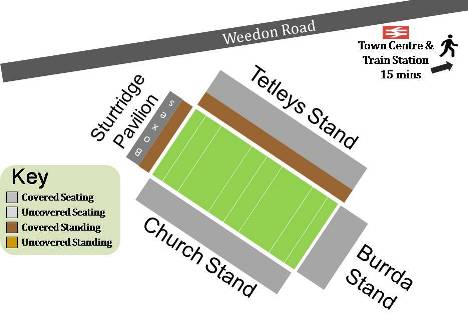 At the North end of the ground is the Sturtridge Pavillion, which is made primarily of corporate boxes with no general access. Plans are afoot to demolish this stand and replace it with a new 2,000 seater stand, with aspirations for development to be complete in time for the 2015-16 season. 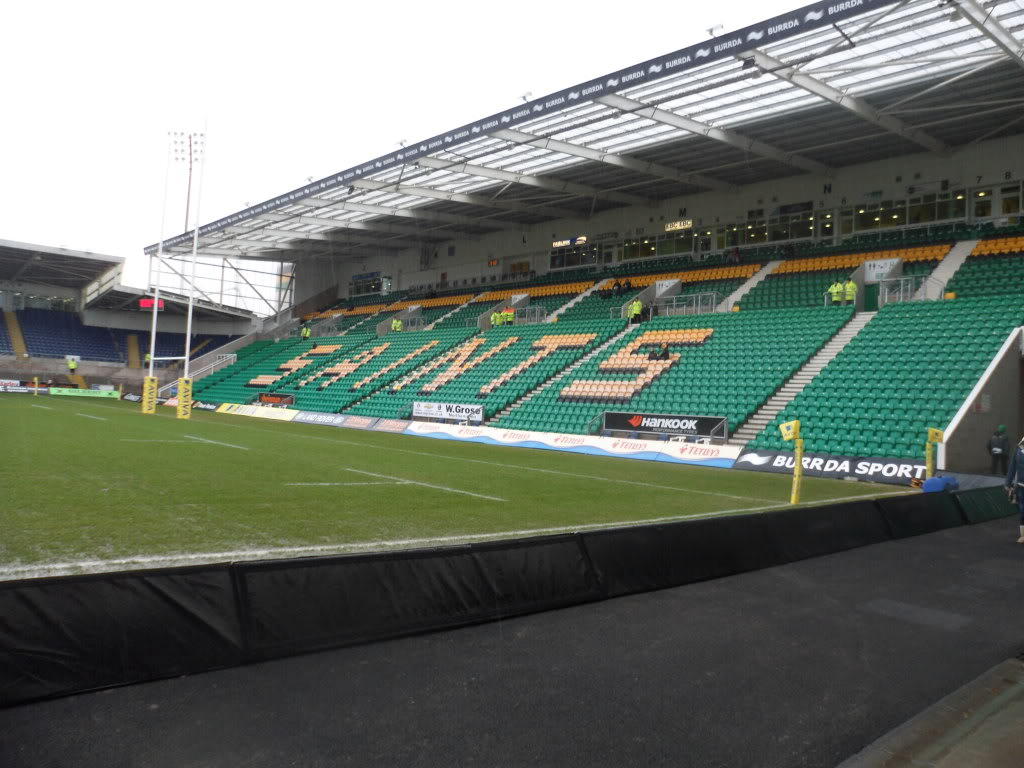 Franklin's Gardens is fairly motorist-friendly. There are 1,500 car parking places available, which are well signposted on the approach to the stadium. Northampton Borough Council have also granted the use of further car parks adjacent to the club's. Saints fan David does warn that getting out following a matchday can be a challenge, especially when nearby Northampton Town FC are playing. A traffic management scheme may be in place to help traffic flow, and you could find some roads closed and others adapted.

To get to the ground by car, it's recommended to stay on the ring road as far as possible (look for the 'R' signs) then follow the signs for the rugby ground.

The folks at JustPark also offer private parking in the area around the stadium - shown in the map below.

Northampton station is within a short walk of the stadium (approximately 20 minutes). Upon leaving the station, turn right for the stadium or left for the town centre and the majority of bars, hotels and restaurants . Services are provided by London Midland and regularly depart for London Euston (55 minutes) and Birmingham New Street (65 minutes).

The number 22 bus, operated by Stagecoach operates approximately every 20 minutes from the train station to the ground.

In addition to the Number 22 bus, Stagecoach buses 9/9A, 5 and D1/2/3 also go past the ground, stopping at the Beacon Bingo hall close to Franklin's Gardens.

The closest airport to Northampton is Birmingham International, which as one of the busiest in the UK offers flights to a range of domestic and international destinations. From the airport there are direct rail links to Northampton in less than an hour.
London Luton Airport

London Luton is around 40 miles from Northampton, and there is a direct bus service operated by National Express between the two, taking just over an hour.
East Midlands Airport

East Midlands Airport (located between Nottingham and Derby) is about 50 miles from Northampton, though the journey by public transport isn't that straight forward. From the airport, you first need to take a bus to Derby before taking a train and changing at least once en route. You can check out what connections are best for you on the National Rail website.

The main place to grab a drink is the big marquee situated behind the Burrda stand. Despite big crowds there is a good system in place so service is quick and easy. There are four other bars open to the public within the grounds - the Heroe's Bar at the South of the Tetley's stand, the Rodber Suite in the middle of the same stand, a small bar on the first floor of the Burrda Stand and another in the Church's Stand.

If you're after coffee or soft drinks, the Village is your best bet.

There are a few popular spots for fans in this rugby-mad town. 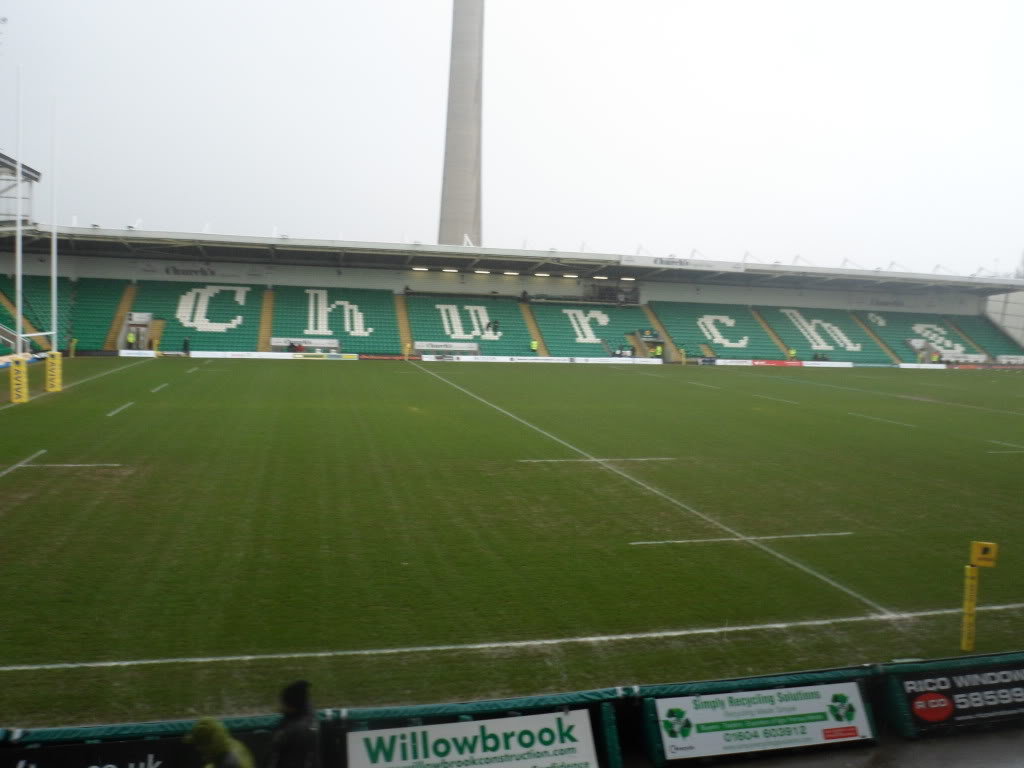 At the rear of the Burrda stand, adjacent to the beer tent is the Supporter's Village area which offers a really good range of different options for the hungry punter, including burgers, pork rolls, lamb broth (for those winter matches), fast food, cookies and pastries. There is normally a small selection of pasties at the various bars dotted around the ground, but these tend to go rather quickly.

Away from the ground, all of the local pubs listed above serve food, and there is a fish & chip shop and Indian restaurant opposite the ground on Weedon Road. 20 minutes walk to the West of Franklin's Gardens where Weedon Road meets the A45, you'll find Sixfields Retail Park with a number of chain restaurants and fast food joints.

A big thanks to Saints fan David for his input to this page.

With the ground only a short walk away, your best bet is probably to stay close to the action in the centre of town. Close to the train station on Gold Street you will find the Ibis and Travelodge, with the Park Inn not far away on Silver Street.

Northampton is a pleasant small town, and an hour or two can be easily passed exploring on foot and admiring the Victorian Guildhall and churches. It's a big rugby town too, so there will be plenty of home supporters around to chat about the game.