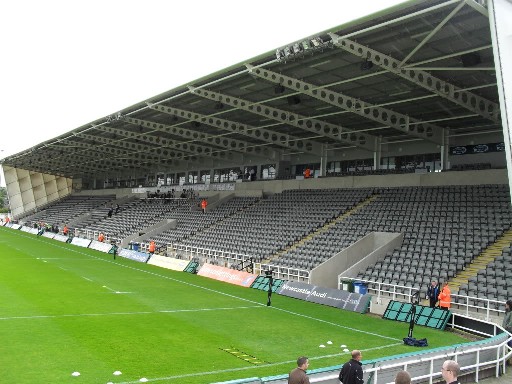 Newcastle Falcons were founded in 1877 as Gosforth Football Club by a group of old schoolboys from Durham, and they have been consistently one of the largest and best-performing teams in the North East of England. In 1976 and 1977 the side collected back-to-back John Player Cups at Twickenham, beating Rosslyn Park and Waterloo respectively with a team packed full of internationals. In 1990 the club changed their name to Newcastle Gosforth and moved to Kingston Park in the North of the City. After a few difficult years at their new home, the then Newcastle Football Club chairman Sir John Hall purchased the club, and set about changing their fortunes.

The club were shortly promoted to the top flight, and in their first season in the English Premiership the Falcons lifted their one and only league title with a team littered with stars, before settling into a pattern of consistent mid to low table finishes. In 2001 and 2004 the team lifted the national cup trophy at Twickenham with victories over Harlequins and Sale Sharks respectively.

After fifteen years in the top flight, Newcastle were relegated in the 2011-12 season but bounced back at the first opportunity, ensuring Premiership rugby in the North East was restored.

The Falcons moved to Kingston Park in 1990, one of those great rugby stadiums where you have four unique and distinct stands to choose from. Originally there was just one stand, the now dwarfed East Stand that is currently still in place and is home to the changing rooms, club offices, shop, ticket office and a bar that is open to the public all-year round. There is a small area of covered seating in the stand, with uncovered terracing to either side.

The West Stand sits on the other side of the pitch, an all-seater structure that also houses corporate facilities, press boxes and several bars. Whilst technically covered, those at the front could get damp if the wind is against you. There is a bar underneath the West Stand where there is usually some form of entertainment on after the game. 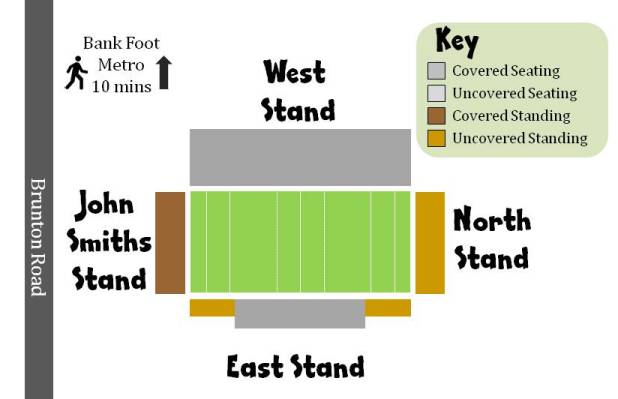 Behind the posts at the Southern end of the ground is the popular John Smiths Stand, which offers a large covered terrace and is the noisiest stand in the house, undoubtedly helped by the fact that it also features a bar underneath. The hardiest Falcons fans are surely to be found in the North Stand behind the posts, where there are no seats, no bar and no roof! It is likely however that a roof will be added to the North Stand at some point in the future. 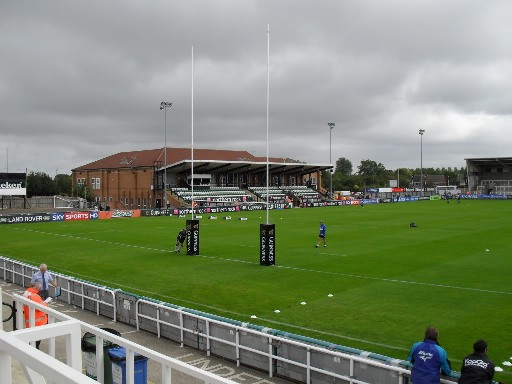 There are 500 paid parking spaces at the ground, although these are limited so should be booked in advance if you don't plan on arriving well in advance of kick-off. There is limited parking in the vicinity of the ground and strict parking restrictions are in place. If you plan to grab some food, you can park at the Twin Farms pub near to the ground and the £10 charge is redeemed if you eat there.

Newcastle Central station is located right in the heart of this great city, and has its own metro station for connections to the ground (see below). Newcastle is a principal stop on both the East Coast Mainline and CrossCountry rail network, with regular direct services South to York (1 hour), Leeds (90 minutes), Doncaster (90 minutes), Manchester (150 minutes), Birmingham (3 hours), London (3 hours) and Bristol (5 hours), and North to Edinburgh (90 minutes) and Glasgow (150 minutes).

The X47 bus runs regularly from Monument in the City Centre of Newcastle to Kingston Park shopping centre, with the journey taking around 20 minutes.

Newcastle has a great light-rail system known as the Tyne and Wear Metro. Rather confusingly however, the closest station to the ground is not Kingston Park, but the next station on the line towards the airport - Bank Foot in Zone 2 of the system. Upon exiting the station turn right, head past (or via!) the Twin Farms pub, take a right then left and you'll be on the road to the stadium.

Newcastle Airport is only a few miles outside of the City. Flights operate to a good range of destinations including Aberdeen, Belfast (City and International), Birmingham, Bristol, Cardiff, Cork, Dublin, Jersey, London (Heathrow) and Paris (CDG).

The airport has its own station on the Tyne & Wear Metro, where you can catch a train to Central Station in the heart of the city in around 25 minutes or directly to the ground in about 5 (alighting at Bank Foot station, not Kingston Park).ht then left and you'll be on the road to the stadium.

Kingston Park has excellent bar facilities for the thirsty rugby fan. Three of the four stands have bars, with only the North Stand dry. The large bar under the main West Stand is where you'll find entertainment, presentations and players after the match, whilst the Hiding Place bar in the East Stand will also remain open after the match.

Located just outside the ground close to Bank Foot station, the Twin Farms is a good stopping off point for those travelling by Metro. Back in town, Newcastle has every type of bar you could imagine, from real ale pubs to cocktail bars to massive clubs. ViewNewcastle.co.uk offers a pretty extensive list. 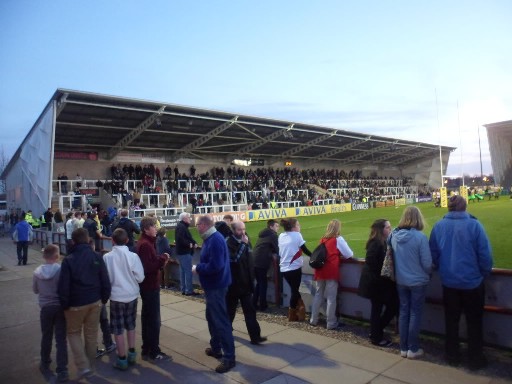 There are two food outlets in the West Stand.

Can you provide more information for this section? Let us know!

Newcastle is a popular tourist and business destination, and has plenty of city-centre accommodation on offer to suit most budgets. The transport connections to Kingston Park are good, so you may as well stay central. 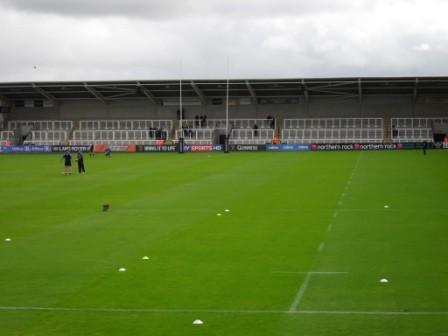 Newcastle is one of the top destinations to visit in England, pretty much perfect for a weekend break. With loads of museums, two great bridges over the regenerated Tyneside area and some of the best nightlife and shopping in the UK, there is plenty of keep visitors occupied. On the sporting front, there will more than likely to be another fixture going on during your visit with football, basketball and ice hockey teams in the City, and greyhound and horse racing tracks nearby.