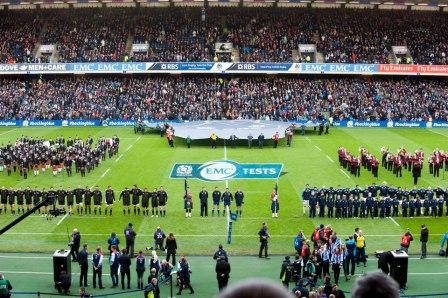 Murrayfield is the national stadium of the Scottish national rugby team and also the home of Edinburgh Rugby, one of two professional club rugby sides in Scotland (the other being Glasgow Warriors). The ground was opened in 1925 and has hosted many memorable games over the years, particularly against fierce rivals England who were the first side to visit.

Scotland compete in the annual Six Nations Championship, and in 112 appearances have 14 titles and 3 Grand Slams to their name, the most recent victory coming in 1999 prior to the introduction of Italy to the tournament. The Scots have participated in every Rugby World Cup so far, their best performance coming in the 1991 tournament where they finished fourth following a semi-final defeat to England at Murrayfield.

Murrayfield is the largest stadium in Scotland with a capacity of 67,130. It is situated in the West end of Edinburgh around 2 miles from the City Centre.

There are two tiers of seating on all four sides of the stadium, with the West and East stands running the length of the pitch, and the South and North stands behind the posts. There is a 100m running track in front of the West stand meaning those seated there are a little further from the action, but there really are no bad seats in the house.The ticket office is located to the rear of the East Stand, and corporate facilities are available in all stands apart from the East. At national games, the Scottish Rugby Union make a huge effort to create a special atmosphere, with plenty of pre and post-match entertainment - think fireworks, pipers on the roof and rounding renditions of Flower of Scotland.

At Edinburgh games only the lower tier of the East Stand tends to be open, due to the low percentage of seats that are filled (a typical league crowd is around 4,000). To try and improve on the resultant subdued atmosphere in such a giant stadium, the club have introduced a pitchside standing area so the fans can get up close to the action. Despite such efforts, there have been constant calls to move to a more suitably sized venue and in 2016, it was announced that from early 2017 at Myreside. The home of Scottish Premiership side Watsonians will be brought up to a capacity of around 6,000 for Edinburgh games.

Driving to the Murrayfield area is possible, but parking is a bit trickier to come by. Official parking is available behind the West Stand for disabled supporters but needs to be pre-booked. Park-and-ride schemes exist for international games - just check on the SRU website for specific details for your match.

Edinburgh's principal station is Edinburgh Waverley, just over 2 miles from the ground if you're up for the walk. Alternatively, Haymarket station is around a mile from the ground, although for international games it can get very busy and queuing systems may be put in place. There are plenty of bars at the ground and on the walk back if you are happy to kill some time and let the crowds clear.

Edinburgh's controversial tram line opened in 2014, running from the Airport to the City Centre. Murrayfield is served by a stop at Roseburn, a short walk from the stadium. Every tram stop has a vending machine for purchasing tickets either by cash or card. The trams weren't overly designed for the large crowds following an international fixture however, so tend to be overwhelmed for a while.

Edinburgh has an extensive bus network, and a multitude of buses go past the stadium;

All of the above services stop on Princes Street in the city centre (check the numbers on the bus stops to make sure you are at the rigt one), whilst the majority also call at Haymarket.

Edinburgh Airport is about 6 miles from Murrayfield and 8 miles from the City Centre. Although a relatively small airport, it does offer scheduled flights to most destinations in the UK and Ireland and a few further afield, including Belfast (City and International), Birmingham, Bristol, Cardiff, Cork, Dublin, East Midlands, Exeter, Jersey, Knock, London (City, Gatwick, Heathrow and Luton), Manchester, Milan (Malpensa), Norwich, Paris (CDG), Rome (Ciampino), Southampton and Shannon. Budget airlines Easyjet and Ryanair are the main players here.

The Airlink 100 bus departs every 10 minutes or so during the day, and passes Murrayfield on its way into town - a quick and easy alternative for those who want to avoid the expense of taxis. The shiny new trams offer an alternative route into town.

Glasgow Airport is an alternative option but a little trickier to negotiate once you arrive - first take a bus from the airport to Glasgow city centre then an onward bus or train to Edinburgh. A wide range of airlines operate into the airport, including Easyjet (to Belfast, Bristol, London and Paris amongst others), Flybe (to Belfast, Birmingham, Cardiff, Exeter, Manchester, East Midlands, Paris, Southampton), Aer Lingus (to Cork and Dublin) and British Airways (to London). 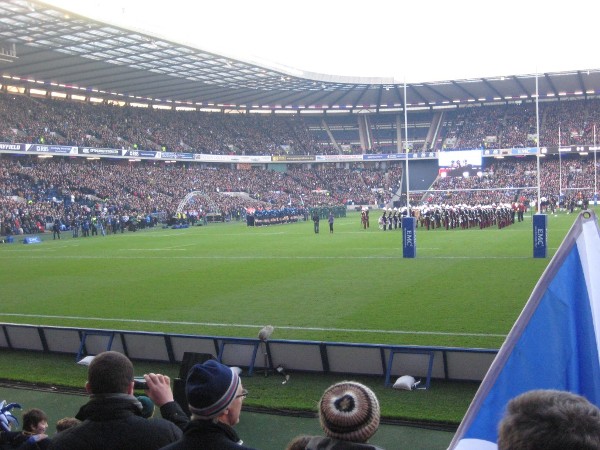 View from the South Stand

At national games, alcohol is served up in two large marquee tents set up in the grounds of the stadium (behind the North and East Stands) where a fairly efficient queuing system is in place - drinks can be taken into the ground so pick yours up on the way in. You can nip out during the game or at half-time to get another round in if you have a thirst on.

At Edinburgh games, there are bar facilities laid on in the East Stand concourse and at pitchside.

Edinburgh is full of fantastic places to eat, so you won't need to look far whether you are after a quick pub meal or five-star dining. Check out Edinburgh Eating where you can explore your options and read reviews from recent diners.

Edinburgh is a major tourist destination,  so the wide range of accommodation on offer is no surprise. Most visitors opt to stay within walking distance of the major sights in the Princes Street, Grassmarket and Haymarket areas.

If you want to stay within stumbling distance of the stadium, the aforementioned Murrayfield Hotel and the Hampton Hotel are your best bets, though you will then most likely need a bus/taxi to get in and out of the city centre.