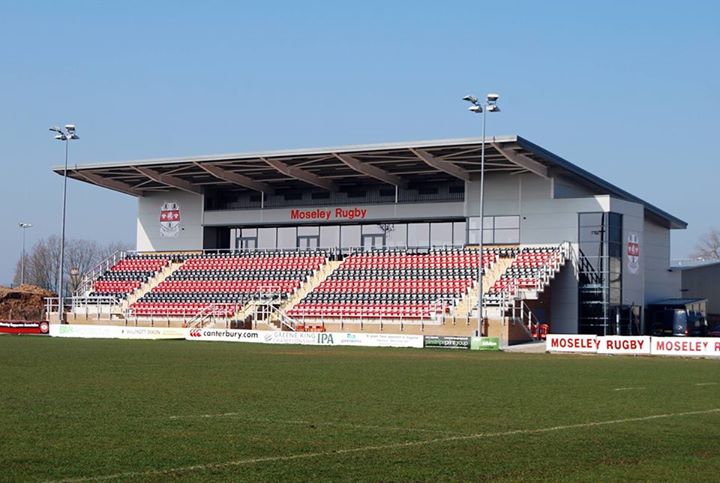 Moseley are the biggest rugby club in the Birmingham area, and have a proud history to boot. Originally formed in 1873, the club are one of the oldest in English rugby and throughout the amateur era were one of the top sides in the country, racking up plenty of famous victories and international recognition for those playing in their red and black stripes. The club rebranded themselves as Birmingham Moseley for the 2015-16 season.

Moseley have played home fixtures at Billesley Common since 2005, and although it is a smaller ground in comparison to some of the larger sides in the Championship, it's a great place to watch rugby. Visiting fans receive a warm welcome in the clubhouse, the atmosphere is good and you have the chance to watch a top-class game up close and personal.


There are now two stands at Billesley following the recent construction of a new modern all-seater stand alongside the touchline, complete with protection from the elements and a function suite within. A smaller seated uncovered stand sits opposite, with the overall seated capacity 1,450. Behind one set of posts you'll find the club's corporate boxes, and aside from that spectators can choose to stand pitchside, with a raised slope at the far end of the ground offering another perspective on the action.

From whatever direction you are coming, your best bet is to get to Junction 3 of the M42 then head North on the A435. Continue on the A435 for 4 miles until you come to a large roundabout at Sainsburys, then take the third exit onto Maypole Lane (signed for Warstock, Shirley and Solihull). Follow Maypole Lane for a mile then turn left into Yardley Wood Road. Go straight on at the roundabout, continue on for around a mile before turning left onto Billesley Common. There are plenty of free car parking spots just outside the ground.

The closest train station to Billesley Common is Yardley Wood, around a mile from the ground. The station is served by local services from either Birmingham Moor Street or Birmingham Snow Hill that operate around every 20 minutes.

If you are travelling from further afield, Birmingham is a focal point of the UK rail network and as such is served by regular fast services from across the country. National Rail Enquiries provides a useful journey planner. The majority of services arrive at Birmingham New Street station. From there, you can catch a bus (see below) or a short walk will take you to Moor Street where you can get the local train out to Yardley Wood.

There are loads of buses that serve Billesley Common and the surrounding area, from all parts of Birmingham including the City Centre. The Moseley club website has a comprehensive list of the relevant routes.

Birmingham International Airport is about nine miles from Billesley Common and is served by regular flights to most parts of the UK and Ireland. There is a train station at the airport, with journeys to New Street station in the City Centre taking about 15 minutes.

Look no further than the Moseley clubhouse! With a well-stocked bar, several food options and with plenty of memorabilia from Moseley's past on show, there is little reason to head elsewhere. Plus, the clubhouse banter and pints with the opposition fans whilst digesting the game is always something special.

The clubhouse opens a few hours before kick-off and stays open until well after the final whistle. In addition, the new stand has an undercroft with bar and food facilities.


The suburb of Sparkhill is just to the North of Billesley Common and has some of the best and most authentic curry houses you can find in the UK. For those using public transport, the number 2 bus to/from the City Centre passes through the area.

Back in the centre of Brum, there are plenty of places to fill your face, from the ubiquitous chain restaurants alongside some great independents.

Birmingham is a popular conference destination during the week, so there are usually plenty of City Centre hotels offering good rates on the weekends. If you want to stay closer to the ground in the southern suburbs, here are a few options.

Birmingham sometime suffers from a dated and ill-informed reputation for having nothing to offer the visitor, but there is plenty to keep you entertained for a couple of days. The much-redeveloped City Centre offers top-class shopping, nightlife and restaurants, whilst golfers will find plenty of courses in the area, including the world-famous Belfry.