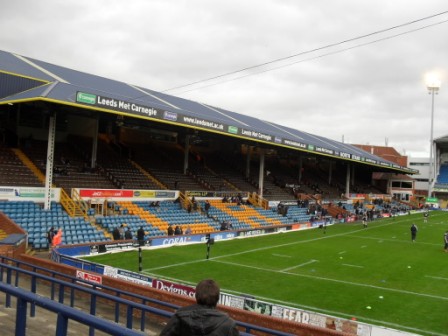 The North Stand at Headingley

Leeds Carnegie currently compete in the RFU Championship, the second tier of professional rugby in England. Since the game turned professional the club have yo-yo'd between the top few divisions, but did manage to pick up silverware in 2005 when they lifted the Powergen Cup at Twickenham with victory over Bath.

Headingley Stadium is located in the suburb of the same name a few miles Northwest of Leeds City Centre. The stadium is shared with the city's rugby league team and Yorkshire County Cricket Club, and has a capacity just over 20,000.

The large North Stand is adjoined to the cricket club and features two tiers of seating, the front of which isn't entirely sheltered from the elements. There are a few supporting pillars that may obstruct views, but not significantly. The South Stand is a large covered stand running the length of the pitch.

To the Eastern end of the ground sits the Carnegie Stand, a significant structure with a large section of seating over a smaller standing terrace. The Western Terrace at the other end offers uncovered standing for those who fancy being left to the elements. 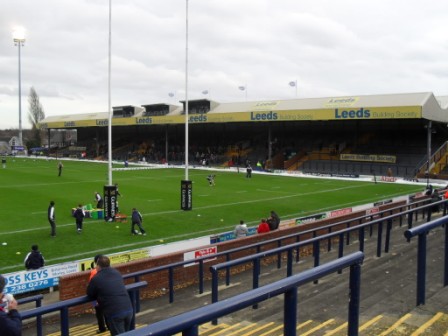 The South Stand, viewed from the Western Terrace

There is limited parking available at the stadium, and only season ticket holders can avail of these.

Headingley and Burley Park stations are both within 5 minutes walk of the stadium, with short connections to Leeds station.

There are several options to consider if you're flying to these part of the world.

Leeds-Bradford International is just over 10km from Leeds, and has been growing the list of destinations in recent years. There are currently direct year-round flights to Aberdeen, Belfast (City), Dublin, Glasgow (Intl), London (Heathrow), Paris (CDG), Rome (Fiumicino) and Southampton.

Whilst it is possible to connect to the rail network, you best bet on public transport is to take one of the three buses to the City Centre. Timetable information can be found here.

From the airport, you can catch a direct train to Leeds in around 90 minutes.

If you can't manage to get a flight via Manchester or Leeds-Bradford, there are alternatives that aren't quite so handy. Birmingham International is one of the UK's largest airports and you can get from here to Leeds in around 3 hours via rail, though you will have to change at Birmingham New Street.

Newcastle is also within reach of Leeds, though doesn't have as extensive a list of connections as those above. 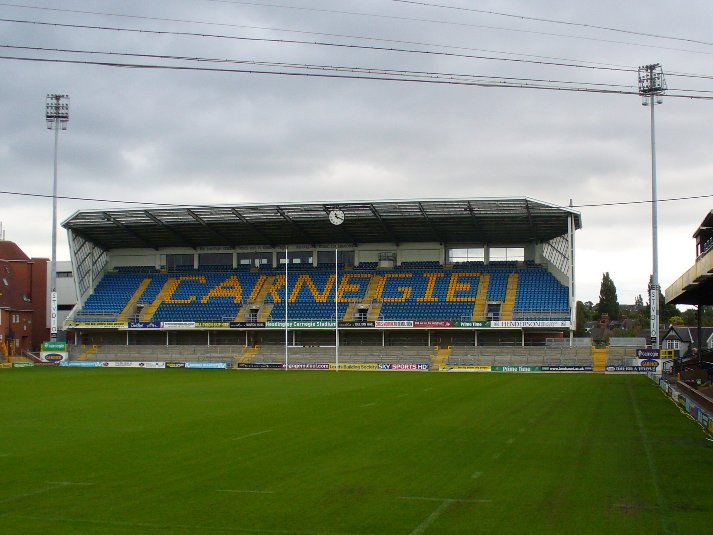 Considering there are students both living and studying in Headingley, you won't have to venture too far to find a watering hole in the area around the ground.

The club's supporters are known to frequent two specific watering holes that offer live sports and food - the Skyrack and the Original Oak - both are located at the end of St Michael's Road in Headingley town centre.

Inside the stadium itself, fans can use the Sports Bar and the Grandstand Bar, both of which you can find situated in the Main Stand. There's a further bar in the South Stand.

Can you add more information on where to grab a drink before, during or after the game? Let us know here!

The City Centre of Leeds offers a pretty good range of options for dining, but you don't necessarily have to head there. With a large student population, there are plenty of options in the suburb of Headingley itself, including Sukhothai (Thai), Salvos (Italian) and Agora (Greek).

Leeds is a cracking city in its own right, but a great base for a weekend or longer exploring all that Yorkshire has to offer.

In the City, there's plenty of shopping, eating and drinking to be had. It's a popular place for students so expect it to be relatively lively 7 days a week.

If you have the car, the Yorkshire Dales is on your doorstep - just head to Skipton and go from there.