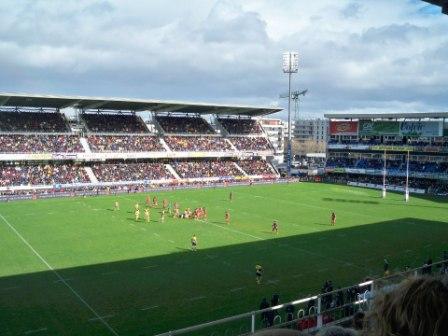 View of the Volvic (left) and Espace Edouard (right) Stands

Perhaps the longest name in club rugby, Association Sportive Montferrandaise Clermont Auvergne are one of the most famous names in French rugby, dating all the way back to 1911. The club hail from Clermont-Ferrand in the heart of France, home of the tyre manufacturer who financed the construction of the stadium where they hold a hugely impressive home record. This is a real rugby town, with the team the focal point of the city.

The Parc des Sports Marcel Michelin is located 3km to the North-East of the centre of Clermont-Ferrand, and has undoubtedly one of the best atmospheres in club rugby, with the local supporters usually making enough noise for a crowd three times their size. The ground was expanded to it's current size in 2011, with further development planned to take capacity to around 20,000. 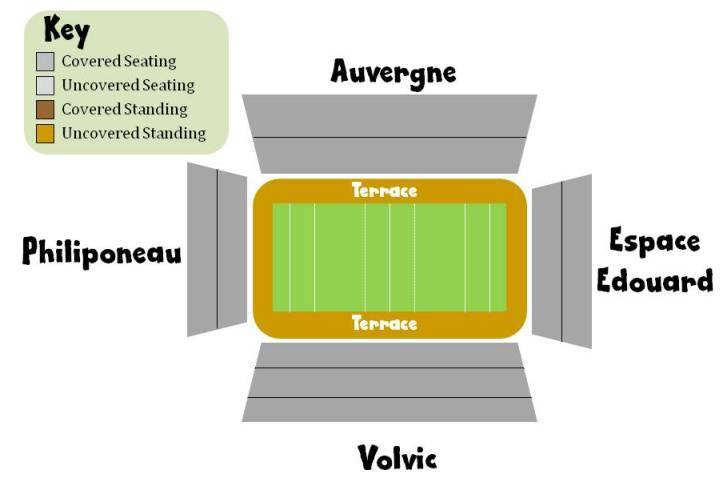 The stadium is fully enclosed and compact, with the steep stands keeping supporters close to the action and encouraging a firey atmosphere. The oldest stand in the ground is the Volvic, a two-tiered stand made up of 22 small blocks of seating that runs the length of the pitch. Sitting opposite is the Auvergne stand, again with two tiers of seating. To the left of this stand behind the posts lies the Espace Edouard, with a small area of seating and hospitality boxes. To the other end is the rather odd looking Philiponeau stand, with two tiers of seating on the upper level. There is space for those who wish to stand at ground level in front of all four stands.

You can view a handy 360 view of the Stade Marcel Michelin (filmed from the Espace Edouard) here. 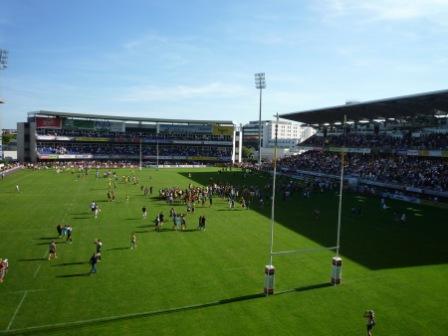 View of the Auvergne Stand (right) and Espace Edouard (left)

It's about 3km from the City Centre to the ground. From the train station, follow the Avenue de l'Union Soviétique, then turn left on Rue Niel. After about 400 yards, turn right onto Avenue de la République and continue until you reach the ground.

There is a tramline running through Clermont-Ferrand, with a stop at the Stade Marcel Michelin. From the City Centre, take the tram in the direction of Champratel. Travel tickets are cheap (E1.40 for a single at time of writing) and are valid on either the bus or the tram for an hour. You can buy tickets at the machines at each stop, but make sure to validate them before getting on board.

There are fast train services from Paris Bercy to Clermont Ferrand, taking around 3h30. Given the limited flight options to Clermont, some travellers (particularly those close to London) mlay find that haf a day spent on the rails is the most stress-free option. Clermont Ferrand's train station is located to the East of the City Centre. Fast services also operate from Lyon (2h30).

They say that good things come to those to wait. Well, for for most travellers getting to Clermont takes a bit of time and effort, but we're yet to hear a complaint from those who have made the journey! Below are the main options for flying into the region.

Just 7km from the City, this small airport offers a limited service with flights operating to Paris (CDG and Orly) and Lyon, where connections can be made to many airports further afield. The number 20 bus links the City Centre and the airport.

There is a TGV (high-speed rail) station at the airport, where you can catch a service to Lyon's Part Dieu station for onwards services to Clermont. Total transfer time will be around 3 hours.

Ryanair's base in the region means that you might get a cheap flight, but you'll need time on your hand for the transfer at the other end. Scheduled flights operate to Limoges' small airport from East Midlands, Liverpool, London Stansted and Southampton. From the airport, get a taxi the 6 miles to Limoges-Benedictins station, where a thrice-daily train operates to Montlucon, where you can then take the train to Clermont-Ferrand. It's either one for those with a sense of adventure we feel, or those planning to book a private shuttle. 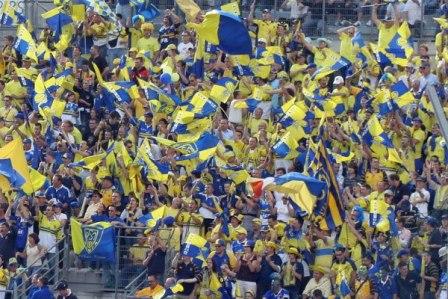 There is a bit of a unique system in place for drinks inside the stadium. You rent a plastic glass for a small fee and obtain vouchers for your drinks. Then you head to a bar to get served. A bit strange, but it does mean you get a glass as an excellent keepsake and the stadium doesn't end up covered in empty bottles or broken glasses. Thanks to Roger Ayers

Cafe Pascal on Place de la Victoire is a good bet, right in the city centre and will show televised rugby. Usually a meeting point for both home and away fans on a matchday.


This section is empty! Can you recommend somewhere to eat in Clermont, or know what's on offer in the stadium? Let us know here.

It might take you a while to get to Clermont-Ferrand, but the reward is reasonably priced accommodation.

Can you add more information for this section? Let us know here!

Clermont Ferrand is a rugby-mad university town, built on top of an extinct range of volcanos in the sparsely-populated Massif Central region. The unique dark grey buildings in the town are the result of volcanic stone quarried nearby. The old town and area around the darkened cathedral are pleasant and a day can easily be passed exploring the streets, cafes and restaurants there. If the weather is nice, the Jardin Lecoq to the South of the centre is open year-round, or Parc Montjuzet to the North offers great views of the valley and city if you can handle a little hike.

Just outside the City Centre, Puy-Le-Dome is the dormant volcano that overlooks Clermont-Ferrand and if you can hike your way up it you will be treated to some fantastic views.

The Auvergne region is a vast mix of lakes, forests and extinct volcanos to explore - perfect for hikers.