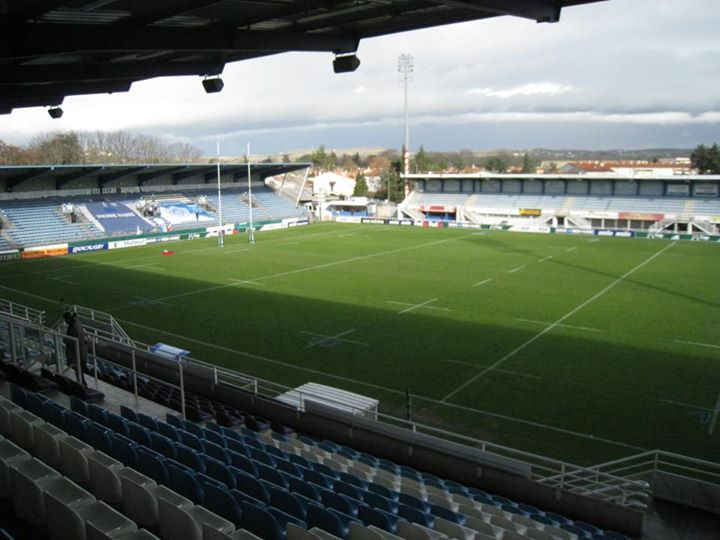 View from the Tribune Rui

Castres Olympique compete in the French Top 14 and Heineken Cup, and play the majority of their fixtures at the Stade Pierre-Antoine. The club were formed in its present form in 1906, and have been ever-presents in the top tier of French rugby since 1921.

The Stade Pierre-Antoine was completed in 1957, and is named after a famous former player Jean Pierre-Antoine who died suddenly in 1956 at the age of only 35. It is handily enough located, around 1.5km to the Northeast of the City Centre in a primarily residential area.

The stadium is enclosed on all four sides, with the Tribune Rui the largest of the stands running alongside one side of the pitch. There is a small section for standing spectators at the front, and a raised section of covered seating to the rear. The player's tunnel is in the middle of this stand. On the other side of the pitch you'll find the Tribune Gabarrou, a similar structure with a small section of standing to the front at ground-level and a raised area of covered seating behind. 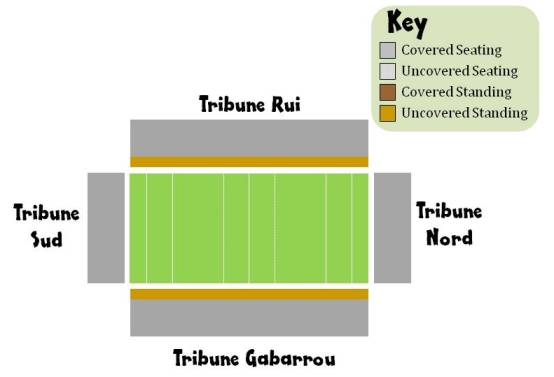 At either end of the ground we have the Tribune Sud and the Tribune Nord, both decent-sized all seater stands that offer cover from the elements. The atmosphere in the ground is usually excellent, and Castres have a proud home record that the team and supporters are fiercely proud of.

Can you provide information on parking or vehicle access in Castres? Get in touch!

The Gare de Castres is located on Avenue Albert 1er, around 1.5km to the Southwest of the City Centre and 3km from the stadium. Although not served by high-speed rail, there are direct trains to Toulouse taking just over 1 hour.

Castres-Mazamet Airport is unsurprisingly the closest airport to Castres, about 5 miles outside of the City. Sadly however there are limited scheduled services other than those to Lyon, Rodez and Paris-Orly.

Just over 65km South from Castres is Carcassonne Airport, host to Ryanair flights to this part of France including those from Dublin, Liverpool, London (Stansted) and Paris (Beauvais). If you are travelling in numbers, it may be cheaper and definitely quicker to either book a taxi in advance or hire a car to get to Castres. If this isn't an option, shuttle buses are scheduled to incoming flights that will take you to the centre of Carcassonne and the train station there. A three hour train journey via Toulouse will get you to Castres.

Toulouse Blagnac Airport is around 90km to the West of Castres, and is the major airport in the region. There are scheduled flights to a host of destinations across Europe, including Birmingham, Bristol, London (Gatwick), Paris (CDG, Orly), Rome (Fiumicino) and Venice (Marco Polo). From the airport, there are shuttle buses taking 20-30 minutes to Toulouse City Centre and train station, from where you can get to Castres in just over an hour.
Béziers Cap d'Agde Airport

Béziers airport is around 120km Southeast of Castres on the Mediterranean coast, and is another Ryanair-dominated airport. Scheduled flights operate to destinations including Bristol, Edinburgh, London (Luton), Manchester, Paris (Beauvais) and Southampton.

Rodez Airport is 125km to the North of Castres, with flights operating to London Stansted and Paris Orly all year-round, and from Dublin between March and October. With limited public transport options however, it's only really an option for those who plan to hire a car.

Not a journey for the faint-hearted, but flying into Paris is an outside option for a trip to Castres. From Paris Montparnasse stations, the high-speed TGV train takes just over 5 hours to Toulouse, where connections can be made for the final hour or so of the journey to Castres.

As with most places in the world, Castres is home to an Irish bar that promises live rugby and live music. It's known as The Quay, and is located on rue Frederic Thomas on the East of the river.

Where are the best places for a pre or post-match pint in Castres? Let us know here. 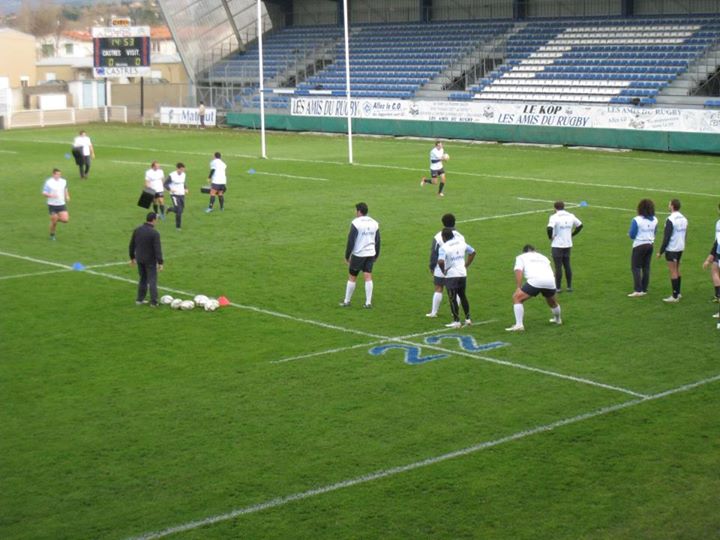 
Can you provide information for this section? Let us know here

There are a few good places to rest your head in Castres.

Although Castres is a pleasant place to spend a weekend, another option is to stay in Toulouse, just over an hour away by train. This is only an option for afternoon kick-offs however, as trains from Castres to Toulouse don't run that late into the evening.

Castres is a smallish place so it is easy to find your way around on foot. It has an industrial background, but the riverside quarter is pleasant and there is sure to be a warm welcome from the locals for travelling fans.