Biarritz Olympique Pays Basque (also known as Biarritz Olympique and abbreviated as BOPB) is a French professional rugby team based in the Basque city of Biarritz, Aquitaine, competing in the ProD2 following relegation from the Top14 in the 2013-14 season. Biarritz play their home matches at the Parc des Sports d'Aguiléra, a multi-use stadium with a capacity of around 13,500 people. For games that require a larger capacity, Biarritz have moved fixtures to the much larger Estadio Anoeta in San Sebastian, though this hasn't been required since the drop to the second tier of French rugby.

The Aguilera is a reasonably compact ground with spectators being kept fairly close to the action. However, with the two main stands being fairly recently-built and the ground being open at both ends, the atmosphere isn't quite as imposing as at some grounds in the French Top 14. There are two covered stands (all-seaters) known as the Serge Blanco and Serge Kampf running the length of the pitch on either side, with unobstructed views from both. 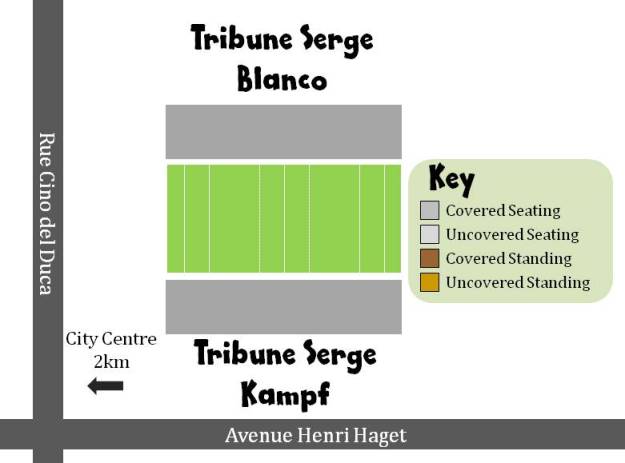 Both stands have corporate boxes at the rear and the newer of the two (the Serge Kampf) has a large function room on the ground floor where pre- and post-match receptions are held. The areas behind the two goals are currently unoccupied but this is set to change in the near future - plans are currently being drawn up for development of these sections of the ground.

Aguilera is fairly central to Biarritz (just over 1 mile from the City Centre to ground) but is situated in a residential area, so even though there are a couple of car parks in the area the roads in the proximity of the ground can get extremely busy.

Biarritz is well-served by the French rail network, with TGV high-speed services operating from destinations including Paris (5.5 hours) and Bordeaux (2 hours) and regular services from Bayonne (10mins) and  Toulouse (4 hours) amongst others.The Biarritz train station is not within walking distance of the ground. However there are a number of buses that can be taken to the town centre or straight to the ground.

Biarritz-Anglet-Bayonne International Airport is only a few kilometres from Biarritz with regular flights from a number of European cities including London, Dublin and Manchester. Either take the bus or grab a taxi to get into town.

There are several bars in the ground but the best option is probably to start off in town and head up for a couple prior to kick off. As the French aren’t huge drinkers (of beer that is), getting served never seems to take very long! 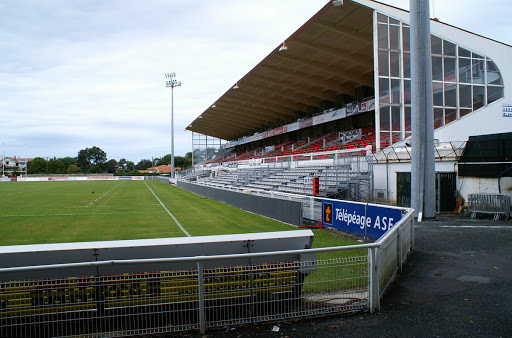 There are a wide range of hotels in Biarritz ranging from Le Grand Hotel at circa €700 per night right down to aparthotels but one that has been used to host a number of rugby groups is the Hotel Gardenia (https://www.hotel-gardenia.com). The Radisson has also got excellent reviews and has a pretty nifty roof terrace pool and bar.

Can you add more information for this section? Let us know here! 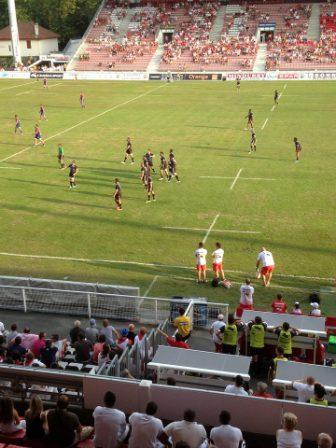 What, apart from the miles of surfer-friendly beaches, bars and restaurants? It's a slight pity that most rugby tourists will be in town during the colder, rainier months, but you'll still have a great time on the Atlantic Coast. If you have a day to spare, the beautiful Basque city of San Sebastian / Donostia is around 50km away. Buses are available or if you are happy to change trains at the border, this is also an option.