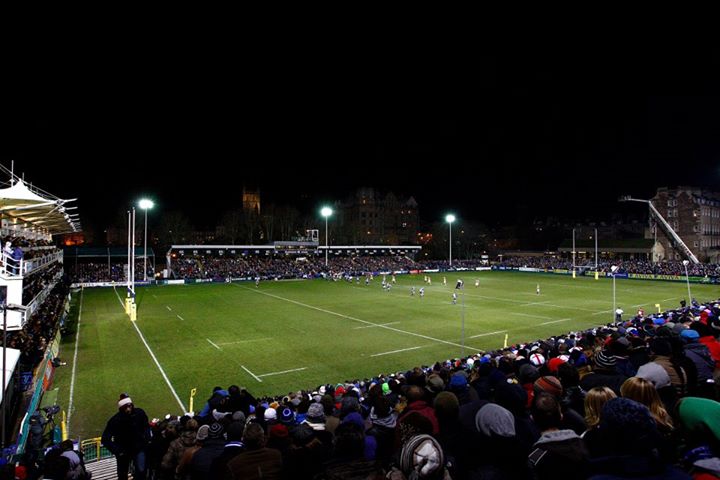 View from the Novia Stand during an evening fixture

Bath Football Club was formed in 1865, making it one of the oldest and most famous rugby clubs in the world. In their early days the club played at various venues before eventually settling at the Recreation Ground (commonly known as the 'Rec'), right in the heart of this beautiful rugby-mad city in the West Country of England. The side currently competes in the English Premiership, European Challenge Cup and Anglo-Welsh Cup, and have a famous local rivalries with Bristol and Gloucester down the road.

When league rugby began in 1987, Bath were the team to beat as they lifted 6 of the first 10 titles. Since 1997 however, the side have yet to taste domestic success again, coming closest in the 2000-01, 2003-04 and 2014-15 seasons when they reached the playoff finals before being defeated by Leicester Tigers, London Wasps and Saracens respectively.

The Rec has to be one of the top places to watch club rugby in the world. The facilities and seating may not earn 5 stars, but the setting and atmosphere more than makes up for it. The ground is wonderfully placed beside the River Avon, with the old buildings and Abbey of the historic city watching over the action.

The largest stand in the ground is the Wadworth 6X stand on the West side of the ground, which offers covered seating to the rear and uncovered seating at the front. This stand doesn't quite run the length of the pitch, but at the South end there is an additional small covered  stand known as the Centurion Stand. Both the Wadworth and the Centurion Stands have some small supporting pillars, but on the plus side are nice and close to the action and offer some (if not total if you're at the front) protection from the elements. 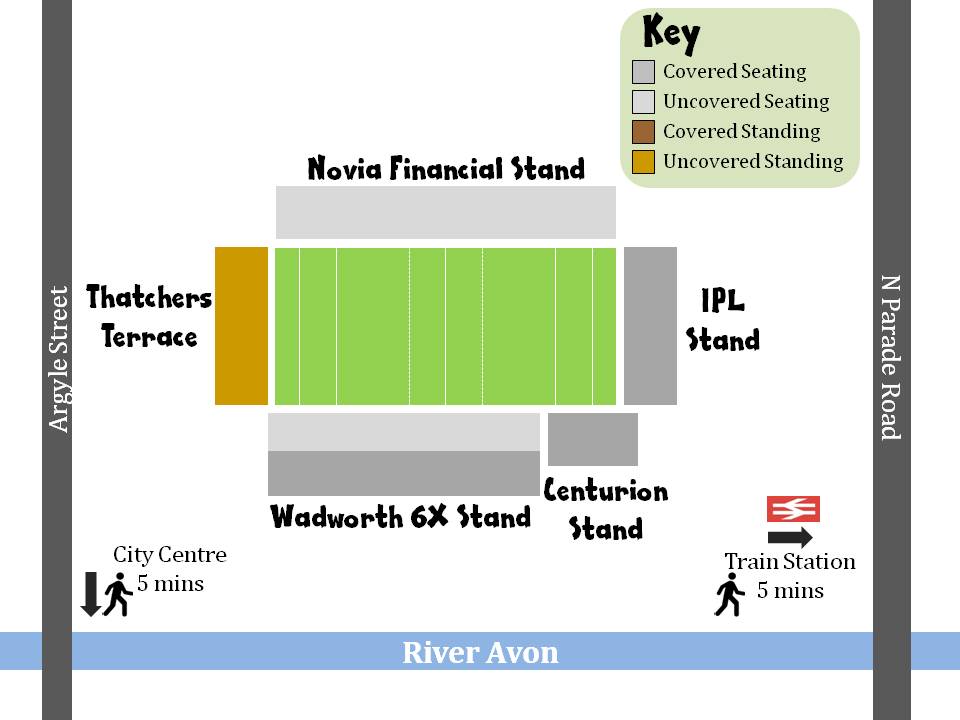 Sitting opposite the Wadworth 6X stand is the Novia Financial Stand,  an large two-tiered affair with uncovered seating. To the South of the ground is the IPL stand, with small blocks of seating at the bottom level, and hospitality boxes above that overhang the seating and provide some shelter from the weather. The North or Clubhouse end of the ground has two sections of uncovered terracing for those who wish to stand, whilst there is another small section of terracing in the North-East corner of the Rec.

Bath is easily accessed from Junction 18 of the M4 for those travelling from the East or West, or from the M5 for those coming from the North or South. The only parking available at the ground is a limited number of disabled spaces - if you require these do you'd better contact the club in advance. Alternatively, there are a number of car parks in and around the city (details here) or three park and ride facilities that will be easier on the wallet (information here).

Bath Spa railway station is a short walk from the ground. Regular services operate to destinations including London Paddington (90 minutes), Cardiff (70 minutes) and Southampton (90 minutes). Bristol Temple Meads station is 15 minutes away by rail, where you can connect with services to other destinations across England. National Rail Enquiries has a useful journey planner for more details.

Bristol Airport is your first option, as it's only 20 miles from Bath. Scheduled services operate to Aberdeen, Belfast (International), Cork, Dublin, Edinburgh, Glasgow (International), Knock, Newcastle, Paris (CDG), Rome (Fiumicino) and Toulouse, with both Easyjet and Ryanair having a presence here. From the airport, take a shuttle bus to Bristol Temple Meads Station and then the train onwards to Bath.

Southampton Airport is about 60 miles by road from Bath. The majority of flights are operated by FlyBe, to destinations including Belfast (City), Dublin, Edinburgh, Glasgow (International), Leeds-Bradford, Manchester, Newcastle and Paris (Orly). There is a train station at the airport (Southampton Airport Parkway), and the journey time to Bath is around 2 hours, though you will probably have to change once - use National Rail Enquiries to find out more.

Around 100 miles away, the world's third busiest airport is also accessible from Bath. There are several ways to get from the airport the easiest of which is to take the direct National Express coach in around 2 hours and 30 minutes. Alternatively, take the regular RailAir Bus service to Reading, where you can connect with London-Bath rail services.

Birmingham International is around 100 miles from Bath, and is well linked by both rail and road. If you are taking the train, you will need to go from the airport station to Birmingham New Street, change onto a service from there to Bristol Temple Meads, then change once more for the final leg to Bath Spa station. A lot of changes, but the total journey time is only around 2 hours 30 minutes. 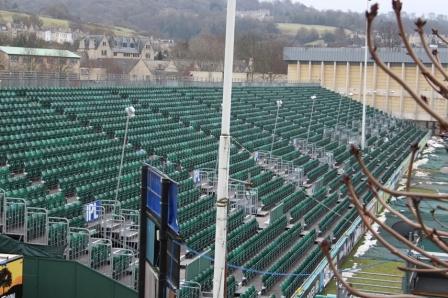 The Clubhouse Bar at the Rec opens about 2 hours before kick-off and continues serving after the match. It's a good place to gather and meet the local fans, whilst there are plenty of other bars dotted around the stadium too.

There are plenty of places in Bath to grab a drink, with a few recommendations below. Make sure to try some of the excellent local cider when in the West Country! 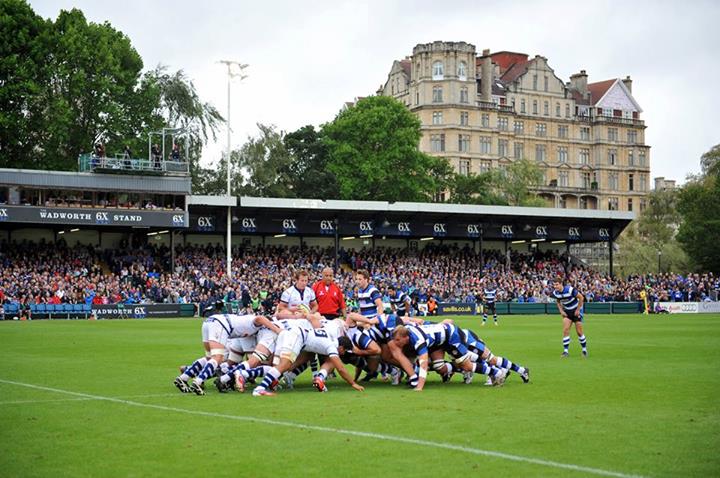 The Wadworth 6X Stand on Matchday

Help provide information for this section - make your recommendations here.

With the ground so close to the City Centre, you can take your pick from a wide range of B&Bs and hotels. Due to the high volume of tourists, you may find some places insist on a 2 night minimum on weekends and it can be quite expensive - prices are similar to what you might expect in London. There are two Travelodges where you might find a bargain, though the Central option is best avoided for those who need peace and quiet.

Alternatively, Bristol is only 15 minutes away by rail and will offer more affordable accommodation, but make sure you leave plenty of time to check out Bath before or after the game.

Bath is a great place to spend a weekend, particularly for those who enjoy their history. The main attractions are the Roman Baths that give the city its name, the Gothic Bath Abbey and the architecture in general. You can easily explore the streets on foot, or take a guided walking or bus tour. When you're done with sightseeing, there are plenty of great pubs and restaurants to keep you amused.